Chinese inverter manufacturers have bagged 6 out of the top 10 spots in the 2021 rankings of global inverter majors by volumes shipped. The rankings, released by IHS Markit, will have come as no surprise to observers, having seen the strong push by these players over the past few years. The only surprise is within the rankings, where the top 4 spots have all been taken by China based firms, and 6 out of the top 10 are Chinese firms. Three European, and one Japanese firm make up the rest of the numbers.

The first big move was Sungrow as no.1 ,after occupying the no. 2 spot these past many years  behind Huawei, the firm it displaced to the no. 1 spot. 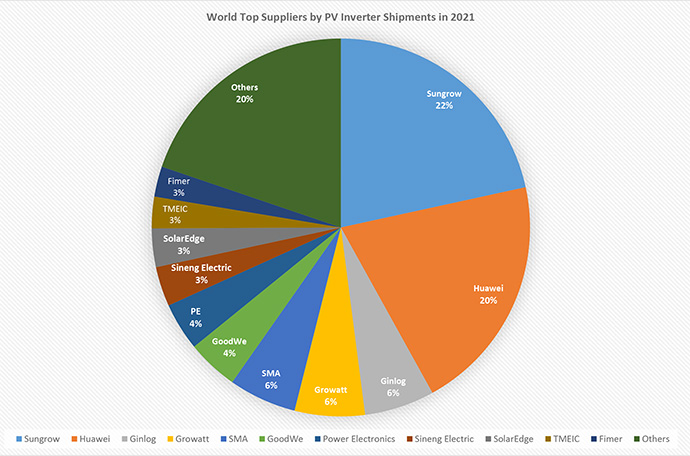 While Huawei suffered due to reverses in multiple overseas markets, including in India and the US, for Sungrow and Solis (the new number three that displaced Germany’s SMA), the story has been the reverse, with both the firms making steady progress globally, especially Europe, the Middle East and now, South America. A more dependable supply line for semiconductor chips helped, as they were able to deliver at a time many top European suppliers stumbled post pandemic. Sungrow in fact recently expanded its India manufacturing plant, one of only two outside China, to a capacity of 10 GW. The other 10 GW plant is in Thailand, opened recently.

The other big mover, Solis, not only moved up to round off the top 3 rankings but it is among the youngest firms to get there so quickly. To put the move in perspective, Solis revenues in 2021 grew over 58% to over $512 million in 2021. Shipments of over 705K units added up to 14.4 GW, almost doubling its previous cumulative shipments to 30 GW.

Leader Sungrow shipped over 47.1 GW to grab pole position. It has also been burnishing its global leadership credentials by joining up for global sustainability initiatives like the RE100 and EP100. This sensitivity to the global and local markets has marked out the new breed of Chinese firms in the renewable space.

A Success Story That Started In 2020

The Chinese resurgence in solar inverters, much like the dominance in solar PV is remarkable considering the fact that before 2009, none of the 6 China based brands in the top 10 were even known outside their domestic market. And now, all the four firms to have expanded market share are Chinese, including Growatt and GoodWe, beside Sungrow and Solis. .

SMA and KACO of Germany, Power One of the United States, Satcon and Fronius of Austria jointly controlled about 60% of the global inverter market share.

It was only in 2011 that the “big brother” of China’s photovoltaic inverter industry, Sungrow, which had been around for more than 10 years, ranked among the world’s top 10 shipments for the first time.

Sungrow’s success showed the way in many ways for other Chinese firms, with each following contrasting approaches to make an impact. Supported by a strong growth in domestic markets and local support, these firms found the space to scale up and invest in research that would help them catch up with the European led market leaders until then. Central inverters dominated the market, with over 90% share. 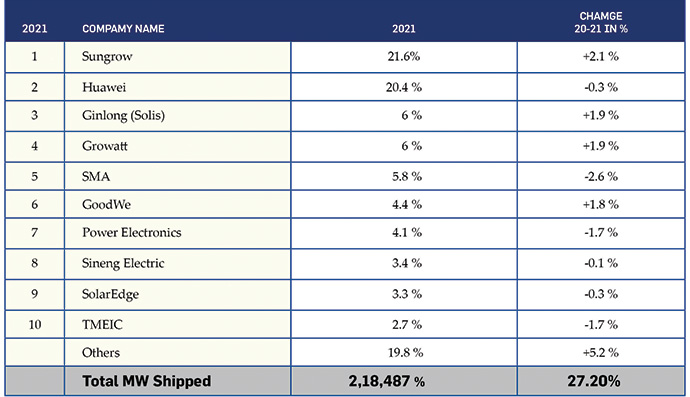 This was when Huawei, which saw synergies between its ‘old’ communication equipment business and the power management business, made its big move. Not only did it move into inverters, it did so by choosing a then niche category of series (string) inverters for special focus, besides central inverters.

By 2015, Huawei was ranked no. 1 in the global photovoltaic inverter market for the first time, and Sungrow crossed a major milestone by overtaking SMA, the erstwhile market leader. That is how the rankings continued, right upto 2021 that is. During this time, Huawei led the move towards smarter inverters, adding the ‘Smart’ prefix to its range for good measure.

Speaking to a top EPC player, we were told that the dominant leadership has been long in coming. “Players from China first shook up the market with their prices, as always. But in solar inverters, just prices are not enough, as a high degree of dependability is called for. That is where these top brands have delivered, as they all had a few years of installations behind them by 2018, when they really began to dominate beyond just Asia”.

A senior executive at an Indian inverter firm that has launched its own solar inverters tells us that the Chinese have done much more besides just delivering good value. “We find that each brand has gone with a certain strength. Huawei went for large projects initially, before expanding its portfolio. Then you have players like Solis (Ginlong), who have targeted smaller capacities but with an exclusively string inverters portfolio. Similarly, Sineng built a reputation for its central inverters, Growatt and Goodwe for C&I segment focus etc. The important thing is that each has built a strong portfolio before expanding to newer segments”.

Huawei in fact remains a force in India even if it has been affected by recent events involving its telecom business in India. It’s largest markets remain China, India, Brazil and Germany. It has hopes that newer emerging markets like Pakistan will support growth in the future.

A senior executive at a PSU energy major attending an event recently pointed out that the Chinese players have always been underrated when it comes to the fact that they literally helped make many projects viable with their low prices. “For us, 3-4 years back, any project over 50 MW was a struggle till Chinese players stepped in with their pricing. That allowed us to go ahead and think bigger”. 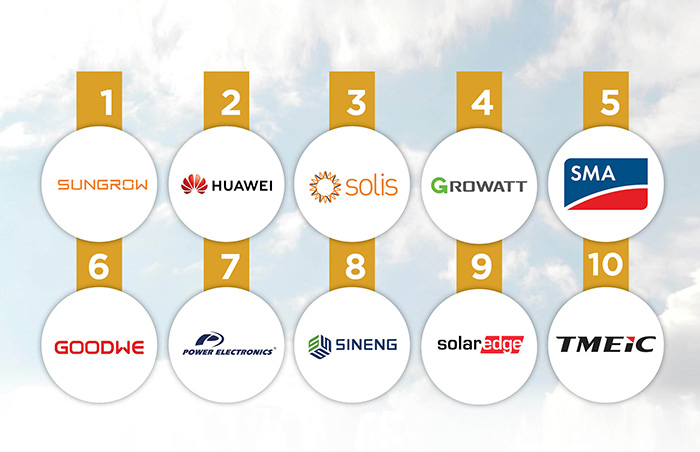 Besides China, Solis has a strong presence in the UK, Brazil and Mexico too, and of course India, where it has made major gains in the past two years.

String inverter technology has gradually narrowed the cost gap to centralized inverters, accelerating the penetration into the utility power station sector. Other factors such as its wider MPPT working voltage range, simpler maintenance, large-scale power of a single inverter etc. have also helped drive this growth.  All of that positions the Chinese cohort, especially leader Sungrow and Solis very well for continued growth into the future.

The other key Chinese players, especially Growatt, GoodWe and Sineng, have all faced their challenges and overcome those too. So while Growatt has already launched a smart EV charger in India, all the Chinese majors have launched a slew of storage based and off grid inverter options to fill market gaps as they emerge. No. 6 ranked GoodWe has been winning awards for its storage solutions from top European institutes like the Berlin University of Applied Science. Growatt has a stronger presence in China and Brazil, even as GoodWe has stolen a march in Australia where rooftop solar has been booming for the past 3 years. 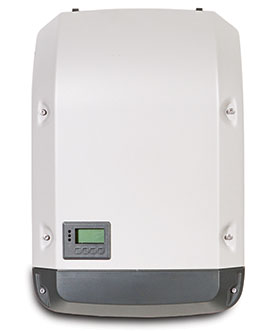 European majors like SMA and FIMER, which have strengths in these new areas due to their technical excellence thus face strong competition now. Fimer is number 11 in the same global rankings, just behind TMEIC of Japan. Interestingly, including Fimer, the top 10-11 players account for over 80% of the market tracked by IHS market.

For European and Japanese players, or even Indian players hoping to make a dent in the market, it has been multiple approaches. From very specialised applications, to focus on segments like microinverters, as US major Enphase has done. Though niche, some of these segments offer higher margins.

The dominance in the solar inverter market mirrors the Chinese dominance in solar modules, except that the inverter dominance is even harder to dislodge today. While inverter costs account for a much smaller share of overall PV projects costs, at anything between 6% to 10%, being an electronics powered item, most governments have chosen to focus on solar panel manufacturing, including India, where a 20% import duty on inverters has not really deterred Chinese players . Unlike the 40% duty on panels that has threatened to slow down project growth overall.