When the Narendra Modi-led National Democratic Alliance government was voted back to power in a landslide victory in the recently concluded general polls, expectations of the corporate world and especially from the renewable industry grew mile high from the Union Budget 2019 which will be presented on 5th July. 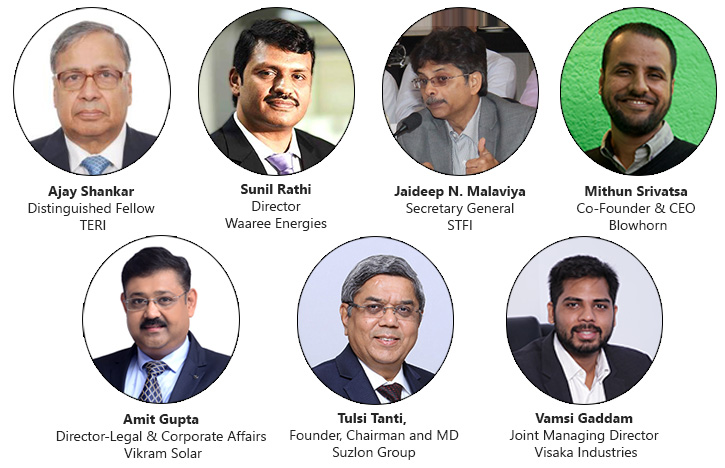 Now with the continuation of the previous government, everyone in the renewables sector expects that the new Finance Minister, Nirmala Sitharaman, would provide some sops or reforms for the industry. This was hinted earlier also in the government’s interim Budget when caretaker Finance Minister Piyush Goyal had said, “Making India a pollution free nation with green Mother Earth and blue skies is the Third Dimension of our Vision. This India will drive on Electric Vehicles with Renewables becoming a major source of energy supply.”

Taking a cue, The Energy and Resources Institute (TERI) also said that the Union Budget 2019 must take forward the commitment to cleaner environment as was highlighted in the interim budget.

Jaideep N. Malaviya, Secretary General, Solar Thermal Federation of India (STFI) expects that “the government should seriously consider mandatory Solar Water Heaters (SWH) on buildings by Municipal Corporations considering the residential roof-top PV under net-metering has failed to enthuse the Electric Utilities. Instead SWH being a higher efficient system will benefit the utility from peak demand shaving and will give business to domestic manufacturers. The budget can reserve some funds to be given to Municipal Corporations who will in turn incentivise residents opting for SWH.”

“India continues to be in the top five developing markets for solar thermal heating systems with average 1.2 million m2 installed area. Considering the rising demand for hot water, which is largely by electrical heating (coal), which is adding to the greenhouse emissions, solar thermal heating can to a greater extent reduce the carbon footprint and be a friend of the electric utilities in power management,” Malaviya added.

While making a strong case for investment push in the sector, Tulsi Tanti, Founder, Chairman and Managing Director, Suzlon Group, put emphasis on issues which are currently prevailing in the industry and sought serious attention from the government. He said: “The industry is looking for huge stimulus for investment, push for ‘Make in India’ initiative, lowering of taxes and streamlining of GST so that tax collections will go up and investment will be improved.”

Given this background, the following are the key expectations of the Renewable Energy (RE) industry from the upcoming Union Budget.

Amit Gupta, Director- Legal & Corporate Affairs, Vikram Solar said: “Our expectation from the budget would be that it focuses on policy direction, rather than just on expenditure.

Besides, GST, investment and taxes, Sunil Rathi, Director, Waaree Energies, wants to divert the government’s focus towards level playing field for domestic manufacturers by saying, “With the NDA 2.0 Government, we look forward to the re-enforced support towards the solar sector in form of subsidies and stringent Anti-Dumping laws. With India losing its preferential trade status with the US, Indian exporters are expected to pay a higher tariff/duty; hence it is imperative to build and maintain trade relations with nations of stronger currency and greater market dominance. While bifacial modules have been exempted from this equation in America, the lack of clarity in the timeline only presents the domestic players with interim relief. Similarly, the Govt needs to implement airtight laws, that would present the Indian solar manufacturers with a level playing field with regards to international players. Introduction of stringent anti-dumping duties would make a mark where the current safeguard measures are unable to control countries like Thailand and Vietnam from encroaching on the Indian solar ecosystem. Such reduced dependency on imports will strengthen the Rupee denomination, thus contributing to India’s GDP and employment generation scenario.”

Vamsi Gaddam, Joint Managing Director, Visaka Industries said, “We are expecting this budget also to be addressing the issues of common man with respect to solar rooftop, which is now a consumer good.

While the trend has been towards reducing incentives, subsidies and depreciation benefits, Government can contemplate Income tax exemptions for individuals investing in solar roofs promoting sustainable homes. There can be GST reduction or exemption, for solar goods sold to non-profit organizations like schools as the 30% subsidy is done away with. This would reduce the burden on these non-profits which find solar investment to be capital intensive. Incentivizing Green buildings investing in solar at the time of construction would ensure installation of higher capacities by incorporating solar roofs at design stage. They can be given incentives like higher FSI permissions and lower property tax etc. While safeguard duties have been imposed to protect local manufacturing, still the price difference between imports and domestic goods is huge calling for enhanced incentives for local manufacturing. There is a need to push innovation in solar cell manufacturing and being an innovative module manufacturer, we recommend incentivizing innovative goods manufacturers for atleast three years till the return of R&D investment. Solar industry globally is moving towards new technologies and higher efficiency panels. For India to not miss the opportunity to be at the forefront of new innovations, special funds have to be allocated for R&D centers to push next generation solar products.”

While speaking on sops for electric vehicles, Mithun Srivatsa, Co-Founder & CEO, Blowhorn said, “E-vehicles is a sunrise industry and government sops under FAME will drive the adoption and manufacturing prowess. We also need homegrown support for battery startups to ensure that we have a full control on verticals of the supply chain. Considering our dependency on Oil, US becoming completely inward with Shale powering all of its consumption and supply tremors; going ‘long’ on e-Vehicles is a good strategic-geopolitical bet and government should accelerate JVs of e-Vehicle makers and homegrown manufacturing. We need to be proactive rather than reactive and this can truly create a whole new swathe of manufacturing jobs.

Smart Cities and city planning should involve mobility startups. Goods mobility in urban centres are 3x as large as people mobility for the same regions. We need to have a dialogue on planning the flow of people within cities as urbanization will only increase as an increasing number of Indians transition into the middle class. Bangalore is a prime example of lost output which can be measurably improved by better urban planning and coordination between agencies. Having central and Federal smart-city plans with deeper engagements with new age startups will be a good play.

We need to rethink our mindset when it comes to regulating innovative industries. A ‘big brother’ attitude leads to killing the opportunity before it is born. Majority of blockchain talent in India is currently scared to stay back and we will have an exodus. Drones can be ideal in rural distribution of essentials. Can we have Special Innovation Zones (SIZs) where the lack of restrictive regulation and innovation is the key focus? Can we expand this concept to earmark some cities as SIZs? Can we use them as a sandbox and expand them to other cities?”

Meanwhile, referring to the former Finance Minister’s vision for a pollution free India in the interim budget speech of February 2019, Ajay Shankar, Distinguished Fellow, TERI, was of the view that “the forthcoming budget should spell out programmes and initiatives, which lead to restoring air quality, water security, 100% sewage treatment and 100% solid waste management over the next five years”.

The interim budget had allocated Rs 300 crore for the National Clean Air Programme. “While it is a good start”, Shankar further added that “the budget should increase this allocation to promote several mitigation measures that need to be taken urgently to resolve the public health crisis resulting from rising levels of air pollution”.

The government must complete the process of transition to clean cooking which it successfully started by enabling BPL families to use LPG through the UJJWALA scheme. Given that all village households in India are now connected to the electricity network, the government should encourage rural communities to use electricity for cooking. Induction cook-stoves cost one-third the cost of gas cylinders.  TERI has suggested that the government should consider free/subsidized provision of induction cookstoves to BPL households.

TERI’s studies suggest that burning of biomass in cookstoves contributes to nearly 32% of PM2.5 in India. TERI has said that this biomass can be converted into a valuable resource for generating electricity through gasification technology. The power utility companies could be encouraged to purchase this electricity through sufficiently remunerative feed-in tariffs.

Shifting a large chunk of population to electric cooking and using biomass to generate electricity would put an end to a key source of air pollution and accrue significant health benefits.

Given that the transport sector is also a major contributor to air pollution, TERI has highlighted the need for the budget to provide sufficient resources for strengthening public transport in India, with a special emphasis on promoting electric vehicles. Setting up of an extensive public charging infrastructure and subsidies for electric buses are two key areas that need immediate attention from the government.

Old commercial vehicles cause considerable pollution and need to be fully replaced with BS VI compliant vehicles at the earliest. TERI has suggested that this transition could happen without resistance if the government enabled provision of attractive prices for trading in of the old vehicles.

Demand for plastics has outpaced all other bulk materials such as steel, aluminium and cement, nearly doubling since 2000. Most of the plastic waste remains uncollected. TERI has suggested incentivising collection of single use, low value plastics by improving their collection rates.

The government should extend the success of Swachh Bharat Mission forward by promoting advanced, cost efficient and decentralized technologies that can result in meeting the target of 100% sewage treatment and 100% solid waste management over the next 5 years.

7). Set up Bureau for Water Use Efficiency

The government must allocate financial resources to set up a Bureau of Water Use Efficiency, entrusted with the mandate to implement programmes for improving water use efficiency in key sectors including agriculture, domestic and industry.