Beyond Silicon: ground-breaking research areas that chuck the Semiconductor 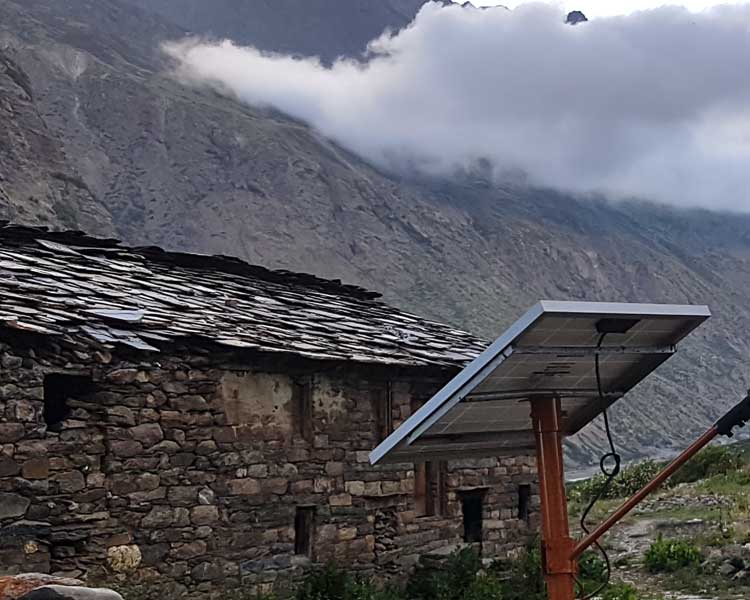 One of the research areas of applied science that has seen a lot of promising ideas go down dwindling (and take companies with them) is that of solar photovoltaic cells. But like Edison said, the most certain way to succeed is to try, one more time. New materials are competing silicon based cells with a variety of innovative and cost-savvy methods.

Sometimes the efficiency maybe too low for the panel to be useful in real life or the material isn’t lasting; some concepts are difficult to realize using current technology, while others don’t get to see the light of day due to lack of proper funding. But we are inching closer, one fail at a time. Here are four major research trends that prove it, and products that may go under the Sun anytime in the next few years.

Multijunction (MJ) architecture is a cunning concept of collecting more energy from the sun.

Different materials are used to produce various layers in a cell that gets the ability to absorbs specific spectrum(s) of light, raising the total overall absorption. MJ cells started from a dual-junction design and have graduated to three or more junction configurations, many of which are currently in production. The latest one to achieve 44.7% lab efficiency, highest in the history of solar cells, is a four-junction CPV cell. And like all CPV cells, a Fresnel lens is combined with this four junction PV cell to increase the illumination – the record achieved in 508 Suns, jointly by Fraunhofer Institute for Solar Energy Systems, Soitec, CEALeti, France and the Helmholtz Center, Berlin.

The cell was made using two dualjunction subcells – an inverted GaInP/ GaAs device lattice-matched to GaAs and a GaInPAs/GaInAs device lattice matched to InP. Materials required for production of these cells aren’t readily available, a junction needed with band gap energy between 0.91.1eV. Challenges in growing devices without degrading the cell quality lead the team to use direct semiconductor wafer-bonding process to combine mismatched materials.

Wafer-bonding enables two Semiconductors devices having different lattice constants and coefficients of thermal expansion to be joined with an electrically conductive and mechanically strong bond. But it requires a flat, 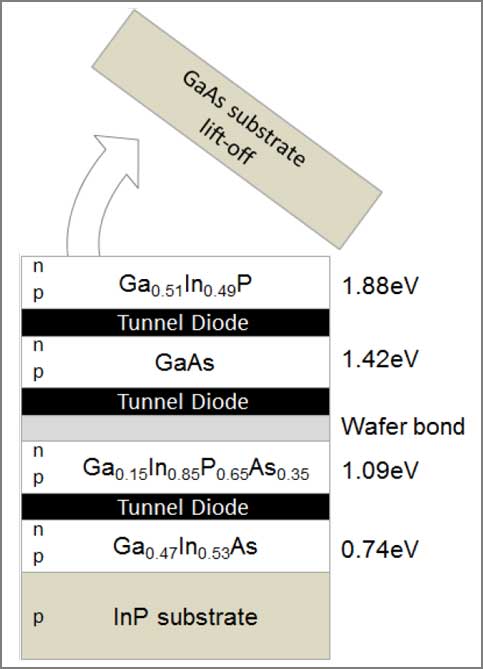 Though this technique also poses a conventional problem of yield vs cost for a terrestrial CPV market, it was overcome using an engineered substrate developed on Soitec’s Smart Cut technology. Instead of using the usual InP substrate, the company could develop an ultra-thin layer of InP on a carrier substrate.

between the top two cells that minimizes optical absorption; a more recent version of the device reduces photocurrent mismatch from 1.27mAcm-2 to 0.71mAcm-2 and has a lower Rseries of 49.0mΩcm2 from 63.5mΩcm2. Post bonding and GaAs substrate removal, the contacts were deposited on the front and back sides of the wafer and 2-layer Magnesium Fluoride (MgF2) / Tantalum Pentoxide (Ta2O5) anti-reflective coating was applied. MJ cells are the heart of concentrator photovoltaic (CPV) that deliver very high conversion efficiencies for a small cell area.

Concentrator cells have much less payback time. With efficiency this high and space requirements cut down to half, they find wide applications from KW to GW scale.

Like Carbon, Silicon has two forms in nature – crystalline and amorphous. Mono crystalline Silicon PV is the most expensive to make, but have the highest efficiency. Together with Polysilicon it forms the first generation of cells. Amorphous silicon and non-silicon materials like Cadmium Telluride or CIGS form the second generation cells. They aren’t as efficient but are cheaper, lighter and have much less ecological impact in production.

If MJ cells are limited to only two layers of materials, it would be simpler and thus, cheaper to make. Tandem cells are individual or connected cells on a single substrate.

The most common way to produce tandem cells is from the monolithic process of growing (depositing) layers on substrate, with tunnel junctions connecting individual cells. To compete with other multijunction cells in efficiency, researchers tried producing them by a hybrid technique of deposition and stacking.

A silicon cell is first fabricated by inserting an intrinsic hydrogenated amorphous silicon (a-Si:H) buffer layer underneath n-type and p-type doped a-Si:H contacting layers; while the Gallium Indium Phosphide (GaInP) top cell is fabricated on a lattice-matched Gallium Arsenide (GaAs) or Germanium growth substrate. The top cell is attached on a 600μm-thick glass slide using epoxy which acts as a separation of the two cells during fabrication, the bottom layer also attached to the slide using another layer of epoxy. The designed prototype has a GaInP top cell with aligned metal grids on front and back, coated with antireflective material; the sliver grids on the bottom cell have optimized current value; and epoxy and glass used in production have restricted refractive index values – all to reduce photocurrent losses and thereby increase efficiency.

Short wavelengths – upto 690nm are converted by the top cell, while conversion of longer wavelengths is achieved in the Silicon hetrojunction bottom cell. 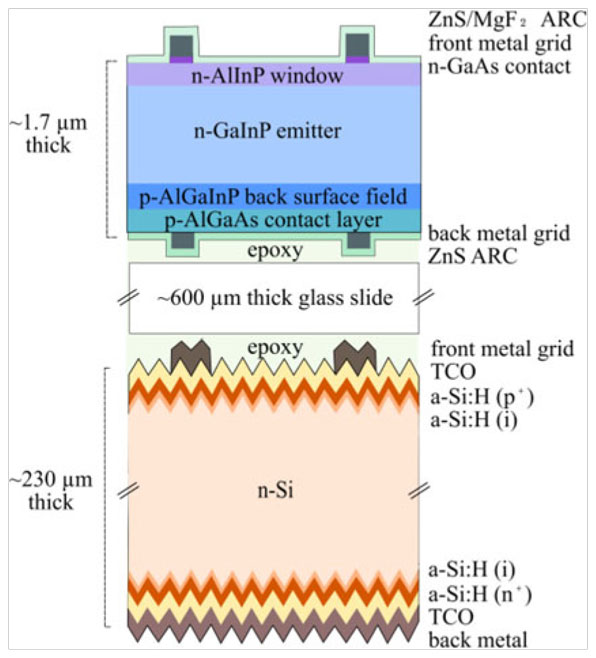 Cross section of stacked GaInP/Si dual-junction solar cell. The GaInP top cell is attached to a glass slide which is glued to the Si hetrojunction bottom cell. Image: IEEE

The research supported by US Department of Energy was published in the IEEE Journal of Photovoltaics, with efficiency of the GaInP-Si tandem solar cell claimed to be 29.8% (1-Sun). Vapor deposition methods continue to be used for newer materials. Perovskite is a recent example that exhibits excellent photovoltaic properties. Found in 1950s, perovskite structure was developed into a solar cell by 2009. A limiting factor is its deposition process that creates specific cell defects that reduces its lifetime to a few years.

More recently, researchers deployed a novel way to conduct the annealing process at low-temperature in presence of dry oxygen that minimizes this effect.

The Hong Kong Polytechnic University developed tandem solar cells using perovskite as its main layer. The team fabricated a tri-layer of molybdenum trioxide-gold-molybdenum trioxide with optimized thickness of each layer and made it transparent for light to go into the bottom silicon layer which is put just under the perovskite layer. It recorded 25.5% efficiency. Another research reported from Los Alamos National Laboratory explained that the defects in organometallic halide semiconducting perovskite solar cells are more of a physical nature than a chemical decomposition. It supports their claim that perovskite defects are formed under light, but within a given time can “self-heal” in dark.

Organic PV and its Inkjet printing

Think about light and flexible solar panel that you can stick on a wall like a sticker or mould flexibly to a desired curve so it fits a vertical, curved or mobile surface – like a car.

Organic Photovoltaics (OPV) is an interesting and emerging technology that lives on by the virtue of comparatively low technological complexity required in manufacturing them; though efficiencies haven’t breached the single digit ceiling (triple junction polymer based OPVs). That said, at the chemical research side, it still remains one of the most complex and high potential materials to innovate on, especially in regards to naturally occurring materials sensitive to light. A research appearing in the IEEE Journal of Photovoltaic expressed the synthesis of a new material – a high performance polymer semiconductor called PDTBT-TT that demonstrated a light conversion efficiency of 6.71%.

The 3,6-dialkyl-thienothiophene and 4,7-bis(thien-2-yl)-2,1,3-benzothiadiazol (PDTBT-TT) polymer is made from the combination of two commercially available monomers. Its theoretical expectations derived from the density functional theory (DFT) results and comparison with polymer PBT4T ( has same chemical structure, backbone conformation, absorption spectra and molecular energy levels as PDTBT-TT) revealed a crystalline aggregated state and stable thermodynamic behavior. A study, also published in ACS Publications, concluded that PDTBT-TT is a promising photovoltaic polymer material owing to a more rigid backbone, stable backbone conformation and few other factors. Contact materials and encapsulation of cell also remains a critical field of work. Materials with slower cell degradation are under investigation as the life of cell is another issue that limits it’s commercially.

Unlike conventional (inorganic) panel manufacturing techniques that are celldependent, coating and printing processes largely define OPV manufacturing. Inkjet printing using the base material as inks are one of the most common processes to make OPV cells. In fact all the layers – polymer, active layer, Silver (for making conducting grid lines) and electrodes are inkjet-printed. This makes organic PVs easy to produce, ship and integrate into present structures. The search for newer materials like the PDTBT-TT polymer pave the way for cheap, high-efficiency and commercially viable OPVs.

CZTS and other Inorganic materials

Many companies are currently using CdTe or CIGS cells as an alternative to silicon based PVs for cheaper modules/ thin-film, flexible and lightweight panels or both. But due to the toxic nature of their composition, new combinations like CZTS are being searched for. 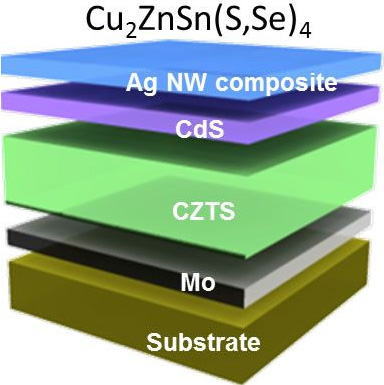 Copper Zinc Tin Sulfide (CZTS), or its selenium alloys – CZTSe and CZTSSe have elements that are non-toxic and are abundantly available in nature. Its electronic properties are similar to CIGS which makes it a capable replacement for thin-film solar cells.

Like organic PVs, recent work on CZTS is vouching actively to push efficiencies to double digits. A study carried out by a team from Incheon National University, South Korea and published in ACS Publications showed that if Germanium is “alloyed” with kasterite-based CZTSSe thin-film solar cells, the efficiency would raise to 9%. The method used enables a band gap in the range 1.0 to 1.5 eV, which is optimum for PV devices. After the process, the final material is termed CZTGSSe.

Inkjet printing technology to produce kasterite-based CZTSSe is a new finding itself, by a research team at HZB. The ink is a precursor solution produced by dissolving Cu, Zn, Sn metal salt and thiourea in dimethyl sulfoxide solvent. It is printed on CZTSSe absorbers and annealed in presence of Selenium to form the panel.

Using a molecular ink, the composition gradients of Cu2Zn(Sn,Ge)(S,Se)4 are spray coated with 0-90% germanium or a combination of germanium and tin. High efficiency devices were produced at germanium to germanium+tin ratio of 0.25 corresponding to a band gap of 1.2eV (similar to CIGSe). Researchers also saw significant improvements in efficiency (11%) and output voltage on a month aged CZTGSSe, processed with longer selenization as shown in the graphic below.

2. their raw materials are abundantly available

3. produced cells are low on toxicity

4. created from ink drop to cell in one go 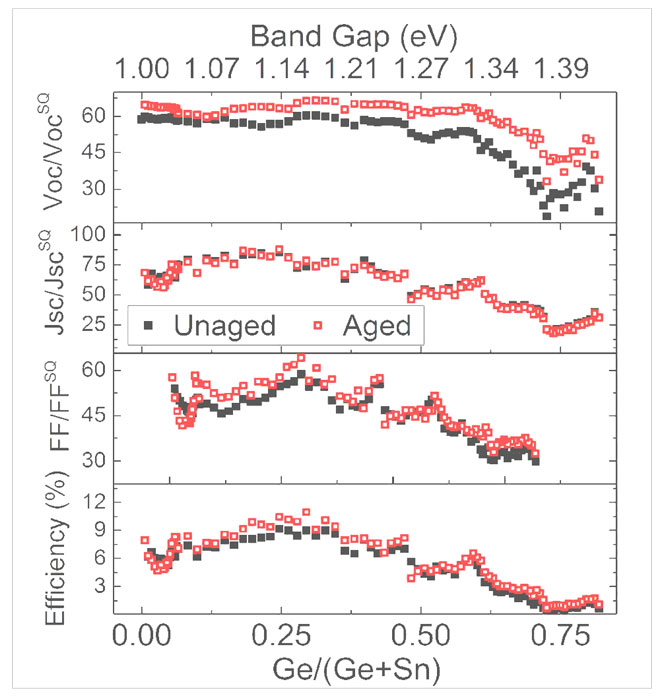 Current-voltage parameters before and after the sample was aged in the ambient lab environment. Image: ACS Publications