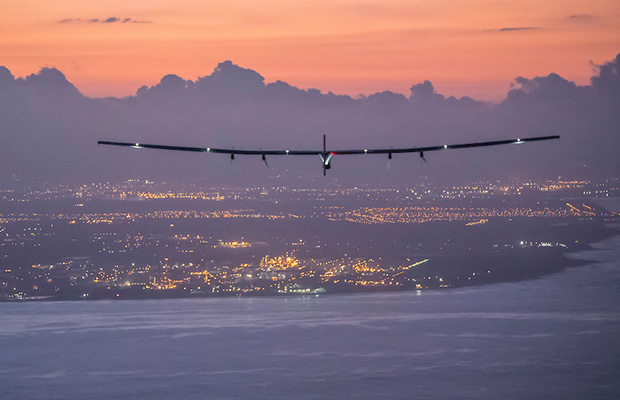 Solar Impulse flying halfway around the world on solar energy, has already proved that it is possible to produce a stable, 24/7 electricity supply using only renewable energy.

On the ground, ABB is helping remote communities and islands like Hawaii to meet and sustain their own energy needs by incorporating renewable and clean energy technologies into the power grid.

Powered by solar energy, Solar Impulse will soon begin the second part of its epic 40,000-kilometer flight around the world, taking off from Kalealoa Airport in Hawaii for the mainland United States.

The Aloha State has pledged to power its islands with 100% renewable energy sources by 2045. ABB is helping Hawaii with that goal as a part of Kauai island’s Battery Energy Storage System, which helps to maintain a stable power supply and provides instant backup power in the event of unplanned outages.

The odyssey began in March 2015, when the 5,000 pound solar-powered plane lifting its enormous wingspan – equivalent to that of a jumbo jet – from the sands of the United Arab Emirates, for its first short leg to neighboring Oman.

“One of our goals for this historic round-the-world journey and for our technology partnership with Solar Impulse is to demonstrate that you can separate economic growth from environmental impacts with help from smarter and more sustainable technologies,” said Greg Scheu, president, Americas region, ABB. “Renewable energy, microgrids, battery storage, higher efficiency standards – these all show that we can power the world without consuming the earth.”

“We had to build an aircraft with an extremely efficient grid: from the electric motors to the batteries and the management system,” said Solar Impulse pilot and CEO, André Borschberg. “What we have is a system that captures its own energy, converts it into electricity, and stores it and manages its consumption in a sustainable way. This is exactly what ABB is doing on the ground with its distributed energy resources or microgrids.”

“If Solar Impulse can fly day and night around the world with no fossil fuel, it demonstrates that these technologies are now mature and ready for the market so everyone can use them,” said Solar Impulse pilot and chairman, Bertrand Piccard. “ABB gives credibility to what we are doing, because it is doing it on the ground.”

The purpose of this historic flight is to achieve something that still seems impossible today: the First Round-The-World Solar Flight, powered only by the sun, with no fuel or polluting emissions.

Clean energy is embedded at team’s ethos, with 17,000 solar panels blanketing the wings, providing power for the plane to climb to 28,000 feet each day, then drifting down to 5,000 feet during the hours of darkness, when the sun’s energy is unavailable.