A Brief Perspective on Aggregated Forecast of Solar Power Generation

The solar power generation shows a promising future in India. But due to the variability and intermittency, large scale renewable energy penetration in existing grid is a challenge and the proper policy and regulatory mechanisms, technological solutions and institutional structures are key issues in solar energy penetration. 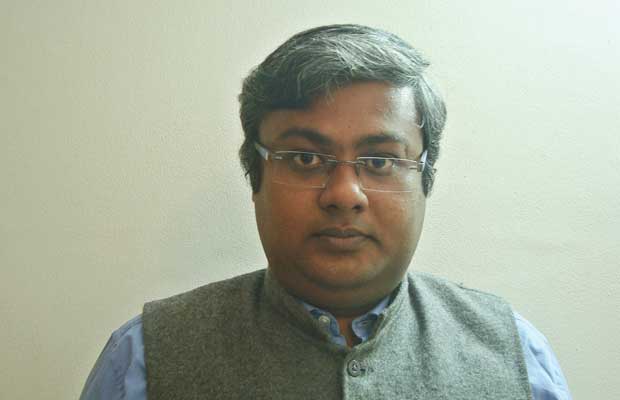 The ‘Forecasting and Scheduling’ (F&S) of variable renewable energy (Solar and Wind) generation is an essential requirement of the stable grid system due to the balancing challenge in load and generation. The concept of forecasting and scheduling of renewable energy generators and the commercial settlement was introduced in Indian context by CERC through Indian Electricity Grid Code (IEGC), 2010. Considering the recent development of different state regulations, the DSM charges are to be computed on a monthly basis. Hence IPPs have to submit their day-ahead power generation forecast and schedule (F&S) to SLDC to manage the grid stability. According to the regulation, the forecasting & scheduling (F&S) of power generation can be submitted to SLDC using two major options:

A forecast model of solar power generation can be viewed as probabilistic evolution to generate different plausible patterns considering the unscheduled fluctuations. A good forecasting system is a process which gives proper accuracy with minimum penalty due to deviation even in a small capacity of solar plants with high variability with minimum number of intraday revisions. This article concentrates on the theoretical structure of the aggregated forecast.

To formulate the theoretical structure in a simplified manner let’s consider two solar plants of capacity C1 and C2. Without representing the detail algebraic construction of the error distribution, the aggregated forecast error at i-th time-block can be represented as

are the scaling factor such that

Hence, in the average case (or the expected value in error according to statistical theory) we can consider

are in the ratio of their plant capacity, the existent de-pooling mechanism considers to divide the penalty due to deviation of two plants according to their plant capacity or depending on the ratio of the energy generation at a particular time-block in which the penalty exists. This assumption in aggregated forecast is correct in some cases, but not sufficient, as it does not consider the variability analysis of the power generation and only plays with the measure of central tendency of the error distribution. This incomplete theory in the agrregated forecast is an issue and hence no valid logical framework is available in calculating the ‘de-pooling’ mechanism in calculating the penalty payable for each plant in case of aggregated forecast.

Considering the variation in error forecasting the variance of the aggregated error can be represented as,

are the variance in the error distribution for aggregated forecast, forecast of plant 1 and forecast of plant 2 respectively. Here ρ is the correlation coefficient. Considering the two plants are almost in the same location, this value tends to 1, i.e.

with some simple algebraic manipulation, it can be shown that, if

which is a natural phenomena unless the characteristics and power generation patterns in both plants are same, 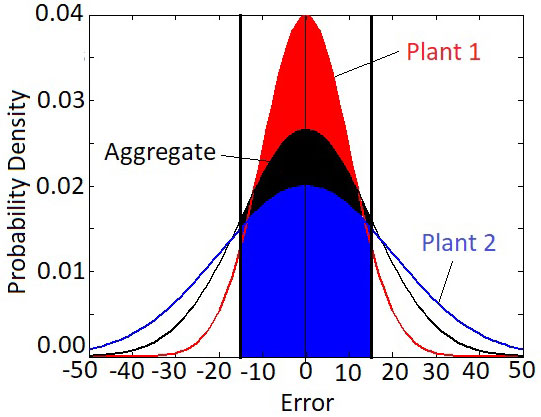 For the error distribution, the area under the curve in -15% – +15% can represent the accuracy of the forecast as this represents the probability that the plant does not have to give any deviation penalty as the deviation error is under +/- 15%.

Hence, considering the multiple plants we can state that, with aggregation, the occurrence of high variability in the generation of one plant affects the error of other plants having stable generation even in the long run. Interestingly, plant specific forecasting does not have this type of anomaly as it solely depends on its own performance not affected by the performance of other plants. Moreover the commercial settlement in penalty due to deviation is comparatively simple in case of plant specific forecast.