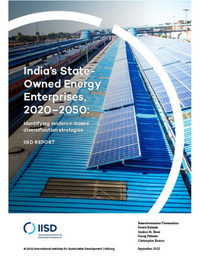 A study titled “India’s State Owned Energy Enterprises, 2020-2050” was released by the IISD (International Institute for Sustainable Development). India has established itself as one of the leading growing economies in support of climate action. It has demonstrated leadership in the expansion of renewable energy, setting a goal to install 500 GW of non-fossil electricity by 2030 and leading the International Solar Alliance. In accordance with the Glasgow Climate Pact, India committed to achieving net-zero emissions by 2070 at the 26th Conference of the Parties to the United Nations Framework Convention on Climate Change in 2021.

This promise has sparked an investigation into potential decarbonization strategies for industries dependent on fossil fuels. The scaling-up of renewable energy and these decarbonization goals are interwoven, and as a result, they bring both opportunities and risks. India’s energy system is dominated by state-owned companies (SOEs), also referred to as public sector undertakings (PSUs). Many PSUs are among the most successful companies in the nation, and they have historically contributed significantly to investments in underdeveloped areas. They also clearly have a part to play in ensuring a just transition for workers and communities over the coming decades as key employers in the conventional energy sector. To address this, future SOE planning must be evidence-based.