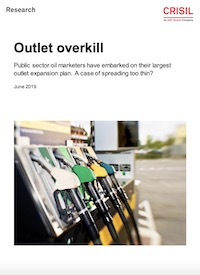 Ratings and advisory Firm CRISIL has released a report, warning about the risks in the fresh wave of fuel pumps the government is planning. The warning comes at a time when the government’s own lead advisory, Niti Aayog, is pushing for a faster shift to EV’s.

In the report titled ‘Outlet Overkill‘, CRISIL has made a strong case against the new move to open thousands of new fuel pumps. In yet another case of saying one thing, and doing something quite to the contrary, the government’s push to open up 78,000 more fuel pumps across the country has been termed a highly risky move, likely to lead to unviable sales at a many of these pumps. The move needs consideration also when the government and its arms have started talking up electric vehicles adoption again, starting with all two-wheelers by as early as 2024. One can only assume that the 78,000 pumps are being seen as a quick fix for the jobs situation, with their ability to generate close to 3 million plus jobs if things go to plan, according to an industry expert.