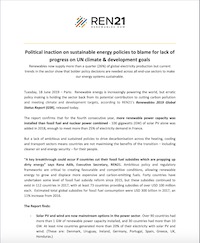 The dip in investment in 2018 can be partly attributed to falling technology costs in solar photovoltaics, which meant that the required capacity could be secured at a lower cost and slowdown in PV installations in China. Global investment in renewable energy has hit $288.9 billion in 2018, with the amount spent on new capacity far exceeding the financial backing for new fossil fuel power, according to new figures published yesterday.

Despite progress in renewables uptake, energy efficiency and energy access, the world is not on track to meet the targets of the Paris Agreement or of Sustainable Development Goal 7. Global energy-related carbon dioxide (CO2) emissions grew an estimated 1.7% in 2018 due to increased fossil fuel consumption. Global subsidies for fossil fuel use increased 11% from 2017, and fossil fuel companies continued to spend hundreds of millions of dollars on lobbying to delay, control or block climate change policies and on advertisements to influence public opinion. These numbers were released by BloombergNEF (BNEF) and were published as part of REN21’s Renewables 2019 Global Status Report.