Shri RK Singh took over as the Union Minister of State (IC) for Power and New & Renewable Energy here, today. He was greeted at the office by Shri Ajay Kumar Bhalla, Secretary, Power and Shri Anand Kumar, Secretary, MNRE along with the senior officials of the Ministries. 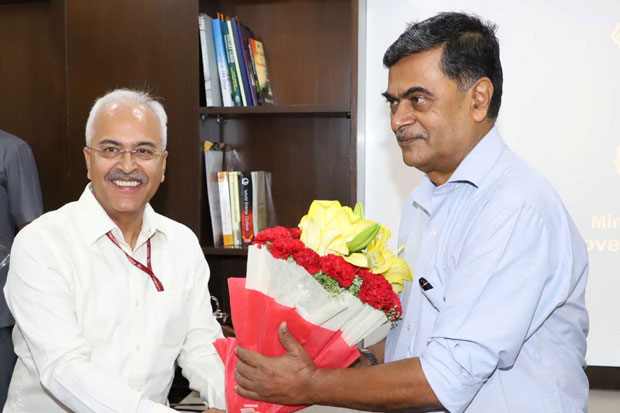 Briefly interacting with the media after taking charge, Shri Singh said that his priorities would be to ensure quality, reliability and affordability of power. He further said that “We will overcome the challenges and would maintain the pace of growth in power sector.” The Minister also emphasised on working towards the right energy mix to meet India’s international obligations.

Shri RK Singh has served as the Union Minister of State (IC) for Power and New & Renewable Energy since September, 2017. He is currently a Lok Sabha Member of Parliament (MP) from Arrah constituency in Bihar. In 2014, he was elected as Lok Sabha MP from the same seat.

As the Power Minister, Shri Singh is credited with achieving near universal household electrification in India under the Saubhagya scheme.

Prior to joining the Bhartiya Janta Party (BJP) Shri RK Singh has been an IAS officer with an impressive career record spanning nearly four decades. As a civil servant, he has held many important positions including those of Secretary, Department of Defence Production and Secretary, Home Affairs. As Principal Secretary, Road Construction Department of Bihar, he was widely credited with transformation of the road network of the State.

Shri Singh was born on 20 Dec 1952 at Supaul (Bihar). He holds several degrees including B.A. (Hons.) in English Literature, LL.B. and Diploma in Management.