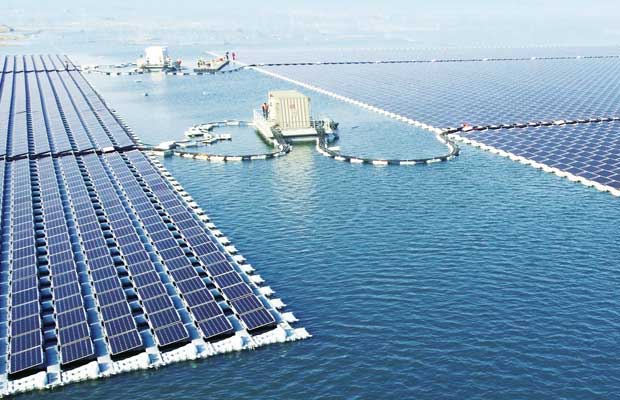 The largest floating solar power plant in the world is now officially in operation. Located in the city of Huainan in the Anhui province in China, the system has a power output capacity of 40 megawatts, which isn’t huge by today’s standards, but was just a decade ago. Floating solar farms have several advantages, not the least of which is they don’t use up valuable land in densely populated areas. China has over 100 cities with populations of more than 1 million. The US, by comparison, has 10. The panels help to conserve precious freshwater supplies by lowering the amount of evaporation into the surrounding atmosphere. In return, the water keeps ambient temperatures around the solar panels lower, which helps boost their efficiency and limit long-term heat-induced degradation. The most interesting thing about the floating solar power plant in Huainan, however, is that the lake supporting it was created by rain after the surrounding land collapsed in a process known as subsidence following intensive coal mining operations over a period of years. Anhui province is rich in coal reserves and has been the source of much of the coal used to power the Chinese economy. “Sungrow supplied the plant’s central inverter unit, which transforms direct current from the solar panels into an alternating current for delivery to the local power grid,”

I Drop News reports. “The manufacturer also supplied a customized combiner box that aggregates power from multiple solar panel arrays and sends it to the central inverter. The combiner box has been specifically designed for floating PV plants and can operate in environments with high humidity and salt spray. Unlike the US, where government policies are shifting to support more coal mining and coal-burning power plants, China is committed to leaving its coal-powered past behind and keep becoming a global leader in renew-able energy. It has pledged to invest hundreds of billions of dollars into solar power as well as wind and hydro by the year 2020. Last year, a 20 megawatt floating solar power plant also came online in Anhui province. This past January, China activated the massive Longyangxia Dam Solar Park. Covering 10 square miles, it generates a whopping 850 megawatts of power — enough for 200,000 households.