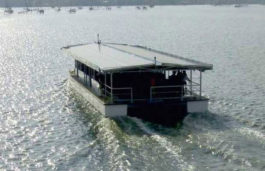 A ‘sun cruise’ has been introduced at the Peruvannamuzhi ecotourism spot in the Kozhikode district of Kerala. Two solar-powered boats will be seen on the reservoir to promote the culture of cruising among tourists. The inauguration of the boats was done by the state’s Water Resources Minister Roshy Augustine. The solar boats belong to Green […]