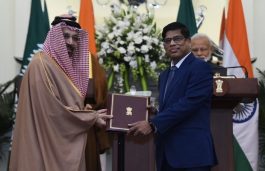 Saudi Arabia has become the 73rd nation to sign the Framework Agreement of the International Solar Alliance. The agreement was inked during the official state visit of the Crown prince of Saudi Arabia, Royal Highness Muhammad bin Salman bin Abdul-Aziz Al Saad to India. The signed agreement was handed to ISA’s Director-General Upendra Tripathy in […]

Infineon Collaborates with Rainforest To Track Forest For...