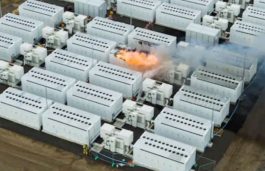 A major fire broke out at Tesla’s 300 MW (450 Mwh) big battery, called the Victoria Big Battery, in Australia’s Victoria state. Starting on Friday, the fire was eventually controlled only today, after a three day struggle. The fire apparently started after initial testing was started to sync the battery with the grid. Fire fighters […]