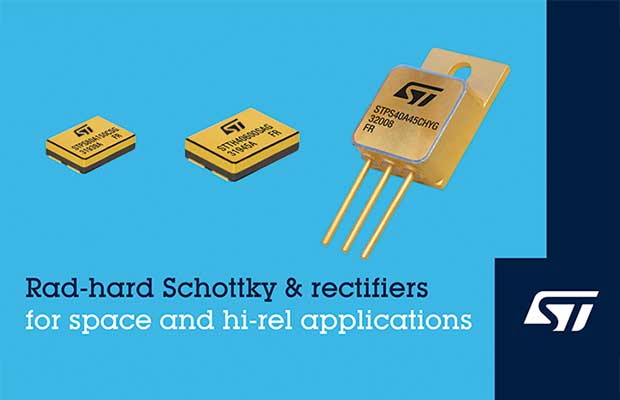 Further, these rad-hard Schottky diodes include 45V and 150V devices, SEB immune up to 61MeV/cm2/mg linear energy transfer (LET). The company also claimed that these are the industry’s first SEB-rated Schottky devices and are suited to use in many converter topologies.

Besides, the company said that its new rad-hard rectifiers and Schottky diodes are guaranteed by characterization to resist a total ionizing dose (TID) up to 3 Mrad (Si).

Interestingly, the voltage drop has also been guaranteed at 4 values of operating current to let multiple different power-supply designs use a single device type for ease and simplicity.

Meanwhile, the company has been fabricated these devices at its factory located in Rennes, France, using the same planar technology which is used in its AEC-Q101 automotive-qualified devices to ensure excellent quality.

The company is among the few major company’s which regularly invested in research and development of new technologies.

In April this year, it had launched new features to secure data exchanges in increasingly aggressive contexts. It also said that its STSAFE-A110 secure element protects the consumer and industrial connected devices in the Internet of Things (IoT), preventing the counterfeiting of genuine products by strictly assuring their authenticity.

Besides, during the month of May, it extended the benefits of its motion-detection machine-learning core (MLC) technologies for industrial and high-end consumer applications with its latest ISM330DHCX and LSM6DSRX 6-axis iNEMO™ inertial measurement units (IMU). The company claimed that this MLC can perform basic AI pre-processing of motion data using about 0.001 times the power a typical microcontroller (MCU) would consume to complete the same task.