Solar capacity additions in the US touched 10.6 GW for 2018, making it currently the second-largest solar PV market in the world.

According to a new report, solar PV capacity additions in the US touched 10.6 GW for 2018, and with a massive 12.9 percent share of the cumulative capacity additions for the year, the country is currently the second-largest solar PV market in the world.

Anchal Agarwal, power analyst at GlobalData said that the US added 10.6 GW of annual capacity in 2018, with the highest capacity additions coming from states such as California, Texas and North Carolina.

“Apart from China and the US; India, Japan and Germany are expected to have significant capacity additions during 2019-2030. The average annual addition between 2019 and 2030 in India is estimated to be around 10.8GW, while that of Japan is estimated at 4.8GW and 3GW for Germany,” she said. 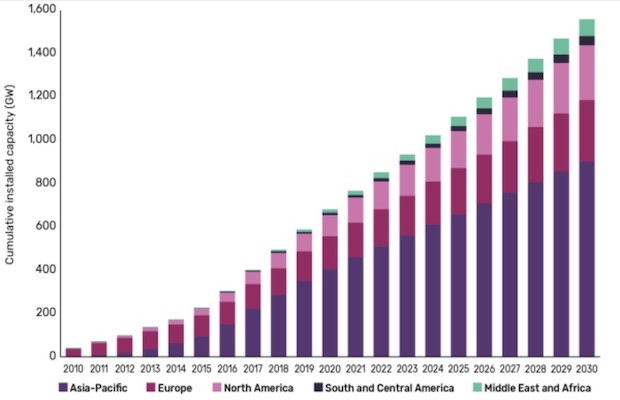 The findings were furnished in the latest report ‘Solar Photovoltaic (PV) Market, Update 2019 – Global Market Size, Market Share, Average Price, Regulations, and Key Country Analysis to 2030’, which reveals that annual capacity addition were significant in China and the US during 2006–2018, mainly due to support programs such as solar PV targets in China and the Sunshot initiative in the US.

The report also added that the global solar PV capacity is estimated to increase significantly from 593.9 GW in 2019 to 1,582.9 GW in 2030 following significant capacity additions by China, India, Germany, the US and Japan.

Agarwal also said that the regulatory framework and policy structure supporting renewable energy in various regions and countries have led to significant development in the global solar PV industry, and have driven the leading solar PV nations in growth trajectories.

“In the wake of growing energy security and environmental concerns, most countries are expected to strengthen their solar PV support mechanisms, which will help the global solar PV industry to maintain growth in the coming years,” she concluded

Tags: 10.6 GW, International, market research, Solar, Solar Market, US, US Solar Market 10.6 GW
"Want to be featured here or have news to share? Write to info[at]saurenergy.com