Even as the Electricity Act Amendment Bill, that seeks to make crucial changes to the Electricity Act (2003) is seemingly on the verge of being finalised for passing, resistance has finally started showing up. Predictably, it is Tamil Nadu, a state which has some of the highest market distortions in its power market, that has started the push back. Heeding this particular call will be a huge disappointment for the power sector, including the renewable power sector.

State Chief Minister  K Palaniswami on Saturday urged Prime Minister Modi to put the act in abeyance, until further discussions with state governments and importantly, after the Corona pandemic. Considering the uncertain nature of the latter, and especially the assured long term impact of the pandemic on economies, that is a clear attempt to spike progress of the bill and what it entails.

The ostensible reasons given to hold back the bill include primarily three issues. The right of the state to provide free power to its farmers, the right of states to nominate the members to its respective State Electricity Regulatory Commission, and finally, the ‘threat’ to discoms from the provision to separate carriage and content in the distribution sector, which would make the power utilities in the public sector totally ‘unviable’, according to Mr Palaniswami.

The reasons appear to be motivated, to say the least, and not necessarily by public good. Free power is still a possibility in the bill, except that the state has to do it by way of direct benefits transfer to the farmers, something that has been done quite well in other areas of agricultural subsidies and more. Tamil Nadu especially, with a much higher penetration of banking channels, should not have too much of an issue here.

On the state regulator, Tamil Nadu has probably made one of the strongest cases for having a more independent state power regulator. Its state regulator has failed to issue even the mandatory tariff revisions for the past few years in the state, since 2014 to be precise. That has seen the state discom, TANGEDCO, hurtle towards record losses yet again, and could well cross Rs 10,000 crores in 2019-20, after losing Rs 9256 crores in 2018-19. 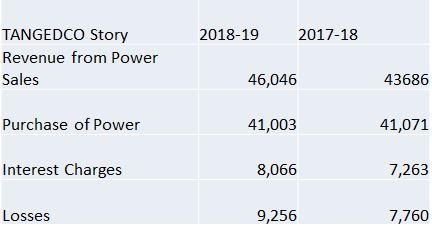 No Need For Private Help? (Rs in Crores)

Plus, the proposed amendments cover critical aspects like contracts enforcement, timely payments and orders against LC’s, all steps that seek to instill better discipline among state discoms.

However, it is clear that even now, just passing the bill with most of the amendments intact will hardly solve the sector’s problems. Accumulated losses of discoms, made worse by the collapse of collections and power consumption since the Corona pandemic, will still need a separate resolution plan.Estimates among experts have varied between  Rs 100,000 to Rs 200,000 crores to solve that for good. Thus, if ever a crisis offered an opportunity to take bold steps, the current crisis is probably the greatest opportunity in the 21st century for India to move to solve its electricity market’s multiple challenges in a big way. Mr Palaniswami’s actions are probably guided by the state elections coming up in a year. That can hardly be a reason to hijack reforms the whole country needs, if it is to be ready for the coming decade and beyond.