West Bengal got the first of what its hopes will be many floating solar plants, with the commissioning of the 5.4 MW Sagardighi plant by Ciel et Terre. PSU Engineering major Bharat Heavy Electricals Limited (BHEL) was the EPC partner for the project. Ciel et Terre is a french floating specialist, and the world’s largest floating solar firm which recently crossed the 500 MW milestone for floating solar, executed the project. Their remit included engineering, float supply, anchoring and mooring, besides supervision. The project had been cited as worth Rs 22 crores at the time of allotment. BHEL had floated the tender for the plant back in 2019. It used 16,880 photovoltaic panels with 320 Wp capacity BHEL make. 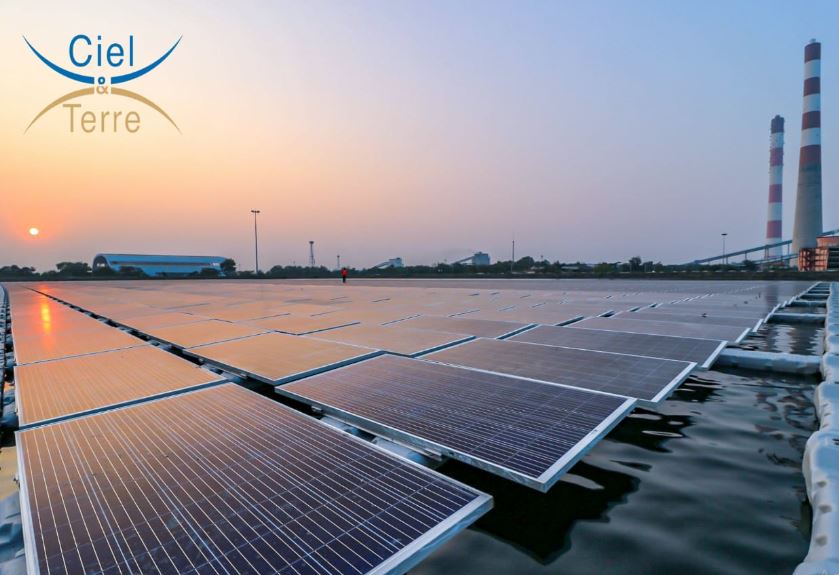 For BHEL, the commissioning is a feather in the cap for what has quickly become the largest floating solar portfolio in the country, in terms of projects commissioned and in the pipeline.

Back in September last year, the West Bengal government had declared plans to focus more on floating solar, considering the pressure on land in the state. And the plethora of ponds and lakes.

The plant has been commissioned for The West Bengal Power Development Corp. Ltd (WBPDCL). It is built upon a raw water pond (number 3) at the Sagardighi Thermal Power Project owned by WBPDCL in the Murshidabad district.

Spread over an  area of 10.22 hectares, Ciel et terre’s  Hydrelio Equato floats, locally manufactured under ‘Make in India’, have been used here. Speaking on this occasion, Deepak Ushadevi, MD CIEL & TERRE INDIA said “Countries like India with large scale thermal power plants can take advantage of floating solar to reduce their captive consumption, water evaporation, and save land space. WBPDCL took the very first step to initiate a
floating project 3 years ago and over the years, surpassed all challenges with the help of enthusiastic & passionate project management officials from WBPDCL including Mr. Bitu Biswas, the project coordinator and today we witnessed a significant milestone towards our goal for a green revolution”.

In 2019, CIEL & TERRE INDIA commissioned its first pilot 452 KWp project at CIAL Cochin and
announced its installation of 14.7 MWp floating solar project in May 2021. Currently, CIEL & TERRE INDIA is executing the mega floating project to the size of 75 MWp in South India and Hydrelio floats are being produced by CIEL & TERRE INDIA at Kerala factory. This year CIEL & TERRE INTERNATIONAL, launched a Global R&D center in Bangalore for innovative engineering and new product development activities.

For BHEL, most of the floating solar wins have come at sites linked to thermal plants so far. For India, some of the largest plans for floating solar at reservoirs of dams are still stuck, as project execution has been seen as requiring much more study of local geology and other factors.