ISA Delegates’ India visit was to study the deployment of solar in India. The summit was significant to India as it tries to achieve the ambitious target of generating 175 GW of renewable energy, including 100 GW of solar energy, by 2022. 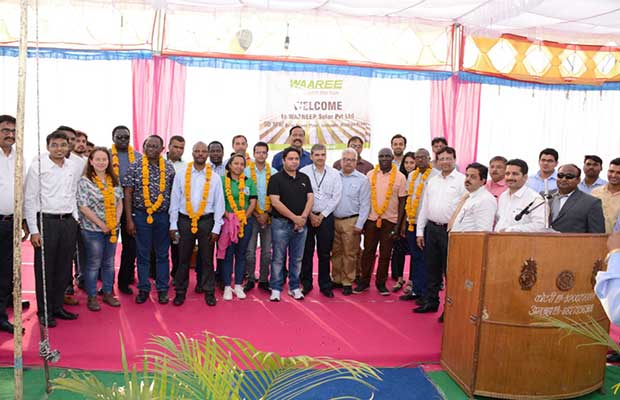 Waaree Energies Ltd., one of India’s largest solar panel manufacturers, welcomed delegates from International Solar Alliance at its 50 MW solar manufacturing plant in Ichhawar, Madhya Pradesh. The visit was a part of their recent visit to India to study the deployment of solar in India.

This was further to the recent ISA Summit and Indian Prime Minister, Narendra Modi announcing that India would give $1.4 billion in aid to 15 other developing nations for 27 more solar projects. As part of the visit, the delegates were taken around the solar plant to showcase the scale of the plant, and were explained the technology deployed. This would help them analyze the feasibility and replication of similar model in their home countries.

On this visit, Dr Hitesh Doshi said, “It was an honour to host dignitaries from around the world at our Ichhawar Project, and indeed elated to have been chosen by the International Solar Alliance. We hope the visit helped in providing an insight on the solar industry in India. It also helped highlight the innovation and technology capabilities of Indian players like Waaree to a global audience.”

The 50 MW solar plant in Ichhawar, Madhya Pradesh has being constructed by Waaree Energies in June 2015, under SECI VGF scheme using Waaree DCR Modules. The plants performance has consistently surpassed its PLF since it was commissioned.

This year, the International Solar Alliance Summit, was hosted jointly by India and France at New Delhi, and saw participation from 23 nation heads and 10 ministerial delegates. The summit was significant to India as it tries to achieve the ambitious target of generating 175 GW of renewable energy, including 100 GW of solar energy, by 2022.