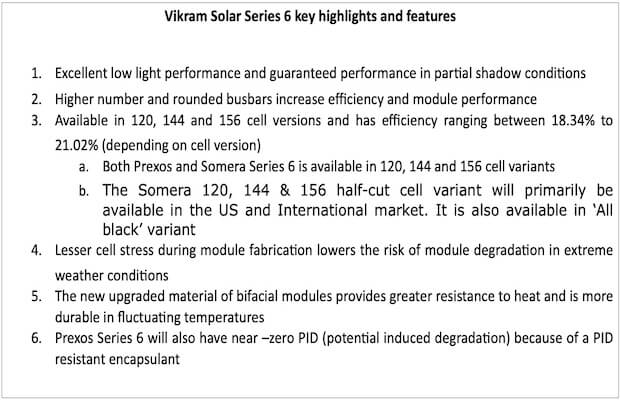 Vikram Solar, a leading domestic module manufacturer based out of West Bengal, has announced the launch of its new Series 6 modules- Somera and Prexos, that have been designed incorporating the next-generation M6 type of cells which many believe to be a superior, more advanced technology for modules.

The firm has stated that the new Series 6 modules will provide a higher power output of up to 505 watt-peak (Wp) and an efficiency of more than 21 percent. Further, the new modules are also cost-effective – reducing the overall project cost and increasing project-level cost savings for the customers.

The M6 Wafers/ Cells have gained more and more recognition since 2019 for being what many believe to be the most balanced option for cost reductions and system compatibility. Gaining popularity amongst Chinese manufacturers, the technology was quickly picked up by solar giants LONGi for all its latest launches.

It is widely believed that in module production, the M6 can achieve more dramatic cost reductions, which in turn is attracting manufacturers to it. The other key attraction is its compatibility. Both upstream and downstream players have confirmed the compatibility of M6.

The Series 6 multi-busbar (MBB) modules will be available in both the monofacial and bifacial categories and are called Somera Series 6 and Prexos Series 6 respectively.  Both come with the technologically advanced M6 cell and Mono PERC technology and are available in variants ranging from 120, 144 and 156 half-cut cells. The 120 half-cut cell variant is exclusively for the US and international markets.

Saibaba Vutukuri, CEO of Vikram Solar said “our R&D efforts are focused on continuously innovating, to introduce the highest efficiency and reliable products, with an unwavering focus on a higher return on investments for our customers. The new Series 6 is a game-changer for the global solar industry from an efficiency, power output and cost-effectiveness perspective. Bringing down the Levelised Cost of Energy (LCOE) is at the heart of designing and manufacturing the Series 6 modules. With this launch, we have further strengthened our product portfolio which caters to all customer segments. It marks a significant milestone in the evolution of solar technology globally and keeps us on the path of leading the change.”

The firm then stated that the technological advancements used to create the new Series 6 products ensured that the MBB half-cut PV modules deliver higher performance even in low light and partial shadow environments. Thereby enabling solar power to be harnessed in earlier unviable sites and varied terrains. “The modules have been designed with specially curated number and shape of busbars that ensure higher efficiency and boost module power and performance.”