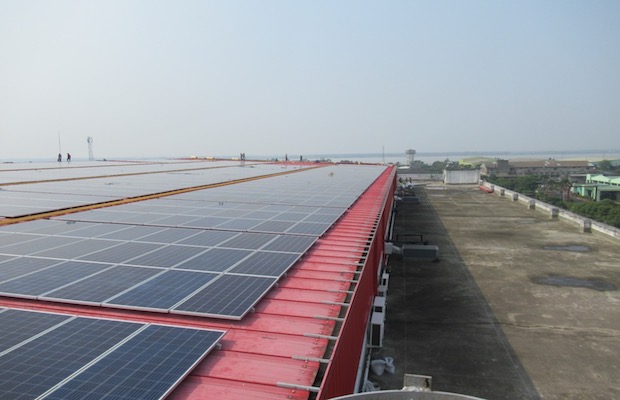 Vikram Solar, a leading module manufacturer and comprehensive EPC solutions and rooftop solar service provider, has announced that it has commissioned a rooftop solar plant at its manufacturing facility in Falta, West Bengal earlier this month. The 919.73 kWp plant consists of 2,574 solar panels ranging from 325 Wp to 400 Wp covering an area of 6,500 square meters.

The solar plant will cater to more than 27 percent of the entire manufacturing unit’s electricity consumption during normal day time operation.

The firm stated that the system is a unique project since it uses 12 different types of modules from a mix of Vikram Solar’s SOMERA Monocrystalline, half-cut and full-cut cell modules.

Saibaba Vutukuri, CEO, Vikram Solar, said, “we at Vikram Solar continuously lead by example through innovation, research and modernisation. This rooftop project was envisioned, not only to cater to the captive energy requirements of our manufacturing unit, but also to making it a green energy unit and enabling India’s transition to a low-carbon economy.

“The project showcases Vikram Solar’s multiple technologies in Solar PV modules, Inverter, and Robotic cleaning systems driven by soiling sensors at a single location and will result in a total saving of about Rs 98.8 lakh per annum on energy. These state-of-art technologies ensure better performance and higher energy yield. We hope that self-sustaining initiatives like this will inspire others to embrace the path to reducing the carbon footprint.”

The solar plant will generate an annual yield of 1,350.58 MWh. To utilise the energy generated from the PV plant, Vikram Solar has installed 14 Grid-connected string inverters from Sungrow, Huawei and Solis and 60 Microinverters from Enphase. The project was commissioned in record-time of within a month despite the complexity of constructing the project with different module types (half-cut and full-cut) and sizes.

In July, we had reported that the Kolkata-based module manufacturer was planning to set up a 3-gigawatt (GW) solar manufacturing facility in Tamil Nadu, after it signed a Memorandum of Understanding with the Tamil Nadu government on July 20, 2020. The firm expects to complete the work on the plant in five years.