The Railway officials said the savings were made by using LED fittings at stations, solar-run UPS systems at reservation centres and solar water heaters in the ‘running rooms’ at Miraj and Ghorpadi. 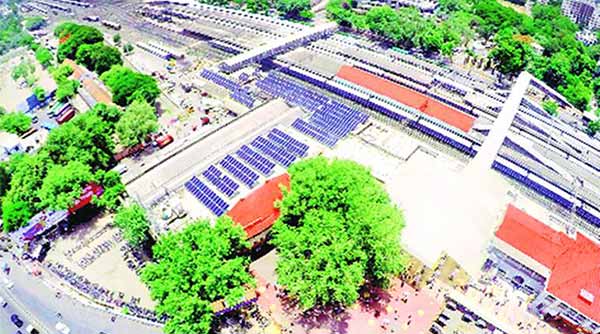 Indian Railways have saved a total of Rs 1.45 crore in electricity bills in 2017 by using solar energy at the Pune Railway station, reservation centres and workshops.

In order to reduce the use of conventional electricity, the Railway officials said the savings were made by using LED fittings at stations, solar-run UPS systems at reservation centres and solar water heaters in the ‘running rooms’ at Miraj and Ghorpadi.

About 14.54 lakh units of electricity have been saved by the division, officials said.

“Pune division is serious about saving energy and effective steps are being taken in this direction,” Milind Deouskar who is the Divisional Railway Manager (DRM) at Pune said.

He further said that this has been possible after replacing traditional lights with LED and solar-powered devices and using solar-powered equipment in other places.

“Two solar power generation plants have been installed at Pune Railway Station with a capacity of 160 KW capacity with the financial help of Persistent Foundation. Apart from this, lights and fans are also being run on the Daundaj Station with 10 KW capacity,” Deouskar said.

According to Deouskar, an ‘Energy Performance Agreement’ was signed with Energy Efficiency Services Ltd for power saving.

“Under this, conventional light fittings, fans and ACs in the stations and offices will be replaced by the new star-rated energy equipment. This is proposed to save about 7.31 lakh Kwh units and it will save Rs 61.35 lakh annually as revenue,” he added.: