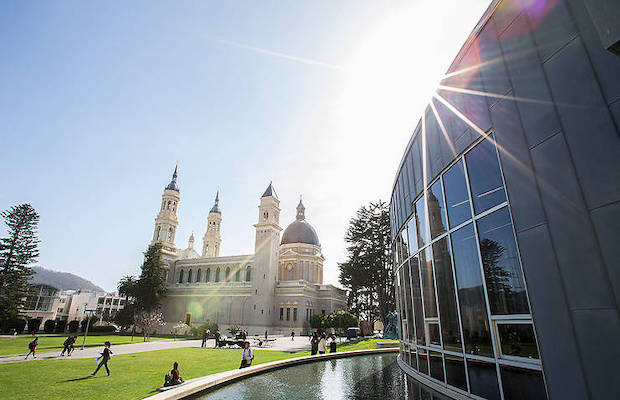 The University of San Francisco (USF) has met its goal of zero net carbon emissions more than 30 years ahead of its 2050 target date set in 2014 with a series of large and small steps, including reducing campus water use by 30 percent and switching to green cleaning supplies, to installing microturbines that produce heat and electricity right on campus and purchasing mission-driven carbon offsets.

USF President Paul J. Fitzgerald, S.J. “For USF, this is both a matter of justice for the poor who even now suffer greatly from pollution and climate change and a matter of justice for future generations who will suffer the consequences of the deleterious changes to our environment. The work USF has done as a community to reduce our carbon footprint aligns with the university’s mission and values, as well as our hopeful vision for our common future.”

Boilers, heating systems, windows, and lighting systems have been upgraded, and more than two-thirds of waste generated on campus is diverted from landfills through reuse, recycling, and composting. USF has also reduced campus water use by 30 percent since 2014, through water conservation initiatives, new pool filtration and kitchen equipment, and upgraded, high-efficiency water fixtures.

Another major component of achieving carbon neutrality is USF’s purchase of carbon offsets, which financially support projects that reduce emissions. After calculating the total metric tons of carbon that USF produces each year, the University purchases enough offsets to account for carbon emissions that cannot be eliminated by its other actions.

An early champion of renewable energy, USF first installed solar thermal hot water systems in 1981 and added solar panels in the early 2000s – which now generate five percent of the main campus electricity. USF was also an early adopter of cogeneration technology, installing its system in 1987. This system produces 1.5 megawatts of electricity and the byproduct is the heat that produces steam that is fed into USF’s central heating system. This system produces approximately 40 percent of the University’s main campus electrical and heating needs while saving significant money and reducing carbon emissions.

“Sustainability is not a destination. We want to get to a point where we are going the other way, regenerating and creating our own energy,” said Charlie Cross, USF vice president for business and finance. “Carbon neutrality is a really key thing, and it embodies that USF is living its values.”