Uneven Grouping of Renewables Leading to Curtailments in India: TCCL

Electricity demand in India grew at a CAGR of 5.1% over the last decade from FY 2011 to FY 2019. However, this fell to a mere 1.2% in FY 2020. India was already facing an economic slowdown, with industrial output declining to an 8-year low during the year, but compounded by the impact of the nationwide lock-down imposed with the onset of the COVID-19 pandemic, the power demand fell more sharply this year.

With the easing of the lockdown, power consumption has started to pick up, however, this uptake may still not suffice to compensate for the drop witnessed in the aftermath of the COVID-19-related lockdown. The report by TATA Cleantech Capital Ltd (TCCL) expects electricity demand to only grow steadily, albeit slowly, until FY 2025.

The report then moves on to detail how post the 1991 economic reforms the share of industrial consumption in the country’s electricity demand – agonist the expectations – mix fell from 48% in FY 1992 to 41% in FY 2019. While on the other hand, the share of power consumption clocked by the residential segment spiked from 16% to 25%. Driven by increased electrification, enhanced lifestyles and aspirations, and increasing dependence on air conditioners. With the increased share of residential demand, India’s daily power demand curve observes twin peaks – one in the morning (8:00 to 10:30 AM) and the other in the evening (6:00 to 8:00 PM), with the evening peak significantly more pronounced.

As is well known, solar energy can help meet, to some extent, the demand during the morning peak. However, the challenge is that the inherent intermittent nature of both solar and wind sources implies that the bulk of the generation coincides with either the o-peak or normal day lean periods. The penetration of infirm solar and wind sources accentuates the requirements from other sources to meet the peak demand.

The report then compares the scenario to the state of California due to similarities in the demand breakup and the load curve. With increased penetration of solar power, California started witnessing the formation of the famous “Duck-Curve”. That increased the stress on its conventional power sources to meet the accentuated peak requirement. To manage the grid, the operators in California had to resort to the curtailment of renewable power. 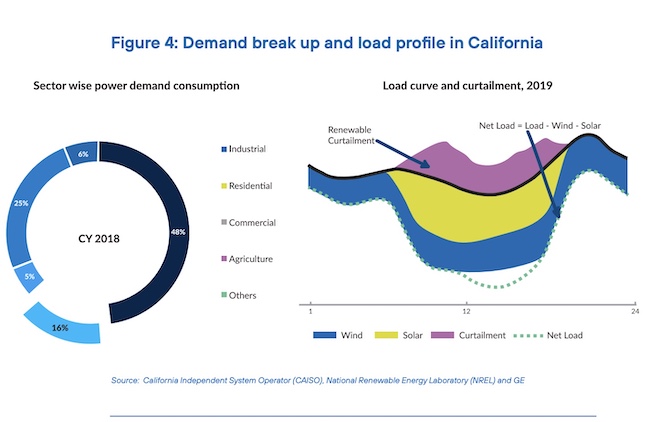 The challenges to grid management posed by the increasing penetration of renewable sources of energy vary across geographies. This is because a lot depends on the load profile and the renewable generation mix. But the prevalence of such challenges creates a situation at times to curtail renewable power to maintain grid stability. Most countries that lead in renewables have also had to resort to such curtailment to maintain their grid stability.

Ideally, power plants that run either on coal or nuclear fuel are unsuitable for the purpose of grid balancing or meeting sudden changes in the demand pattern. These plants are typically used to meet the baseload. Gas and hydropower plants are the best options available globally amongst conventional energy sources when it comes to grid balancing. This is owing to a relatively faster ramp rate and a comparatively lower requirement for the minimum load.

Grid managers also maintain Spinning Reserves. This refers to an extra generating capacity that is available by increasing the power output of the plants that are already connected to the grid, thus enabling grid balancing.

However, due to the limited availability of gas and a lower capacity addition through hydro sources, India has had to rely excessively on its coal power plants for its spinning reserve requirements. Technical constraints related to the operations of coal plants also make it difficult for grid managers in India to absorb a high quantum of infirm solar and wind plants. The problem exacerbates further due to the lack of advancements in the forecasting system. This puts an additional load on the coal plants to meet any unforeseen drop in the generation from solar or wind sources.

To this issue, is the added impact of increasing penetration of infirm solar and wind plants in India.

India’s electricity generation mix has seen a transition over the last decade with the mainstreaming of renewable energy projects. Solar and wind projects accounted for over 60% of the capacity addition in each of the last four fiscal years. As a result, the share of solar and wind power, technically referred to as penetration, in the Indian grid system has more than doubled from 3.5% in FY 2015 to 8.6% in FY 2020. On the other hand, the report adds, electricity generation from thermal energy remained stagnant during the same period. At the same time, the rising penetration of infirm renewable sources and the falling Plant Load Factor (PLF) for the coal power plants is placing increased pressure on the grid managers.

Here arises the issue of significantly higher penetration at the state-level.

The southern and the western states in India enjoy a higher capacity in solar energy owing to comparatively better irradiation, favourable policies and land availability. Coincidentally, the southern and western states possess better wind resources as well, and the bulk of the wind energy capacities. With both solar and wind projects coming up largely in the same states, the penetration levels have increased disproportionately in favour of these states.

In essence, although the contribution of solar and wind power generation at the national level was 8.6% as of FY 2020, the number is significantly higher in these states. For instance, it is 29.4% in Karnataka and 20.6% in Andhra Pradesh. Even states like Tamil Nadu, Gujarat and Rajasthan have clocked shares of 15% plus from solar and wind projects within their total power consumption. The higher penetration in the leading states has placed pressure on their local electricity substations to ensure 100% offtake occurs throughout the year. The situation becomes more severe during the monsoon season when the generation from wind sources spikes up significantly 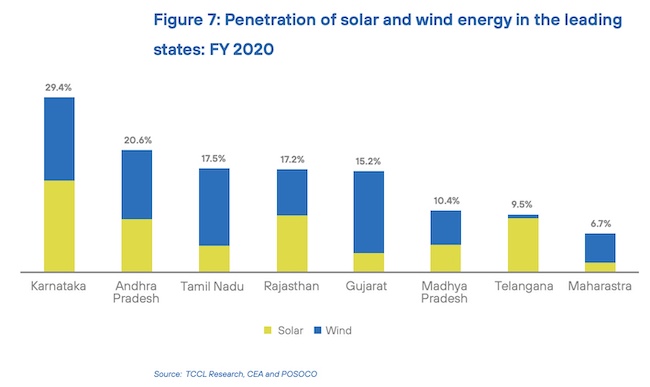 While the conventional power plants also face some curtailment, they are protected by the “Two-Part” tariff structure. This is not applicable for the solar and wind plants because their operating cost is virtually nil, and the project’s bankability revolves around 100% offtake. However, to safeguard the interests of the power generators, the government provides a “Must Run” status to the solar and wind projects. However, there remain loopholes that are being used to curtail solar and wind power by a few states in the purview of grid stability. The fact remains that a unit of power not generated from both solar and wind plants is effectively a unit lost forever.

Any mismatch in the supply to and the demand from the grid results in frequency deviation. The permissible frequency band for Indian grids is 49.95 – 50.05 Hertz. A sudden mismatch between the supply and demand makes it difficult for the grid managers to maintain the frequency band within these limits. The scale-up in the volume and expanding geographical dispersion of infirm solar and wind power also increases temporal fluctuations. That can force grid managers to resort to curtailment.

In technical terms, curtailment is defined as the occurrence of either the following:

Grid Congestion: This occurs due to capacity constraints around the transmission network.

The report goes on to add that while curtailment data is not available in India, several plants across key states have faced significant curtailments in the past. Notably, curtailment was estimated at over 35% in the peak season in Tamil Nadu during 2012 while Karnataka has faced curtailment each monsoon season for the last three years. The situation is similar in Andhra Pradesh, where the generation from renewable projects was arbitrarily pushed down in FY 2020. The National Solar Energy Federation of India (NSEFI) wrote a letter to the Telangana state government reporting significant curtailment losses for the solar plants in that state.

To attempt the quantification of the curtailment, TCCL developed a metric by normalising the monthly generation and arriving at the annual Capacity Utilisation Factors (CUF) for each state. As per this analysis, the CUF of solar dipped by 8.1% and 11.7% in Andhra Pradesh and Tamil Nadu respectively during FY 2020. The same year, the CUF of wind declined by 15.5% and 24.4% in Andhra Pradesh and Telangana respectively. The normalised CUFs fell in the first quarter of FY 2021 for Andhra Pradesh, Telangana, Tamil Nadu and Maharashtra as well. While this reduction can be attributed to lower resources and other soft factors, the prevalence of instances of high levels curtailment cannot be ignored. 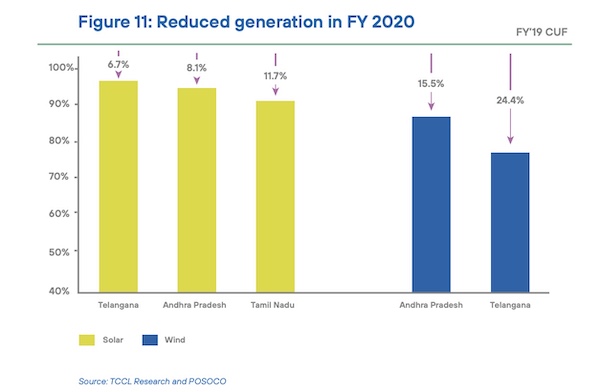 India has set a target to achieve 450 GW of renewable energy capacity by the year 2030. However, as per a study conducted by the Solar Energy Corporation of India (SECI), the installations could result in the curtailment of 50% of the solar generation by FY 2030 if the country’s demand profile remains unchanged.

In a nutshell, curtailment implies the inefficiency of the integration of renewable energy with the grid. Thus, the larger is the flexibility of the system, the smaller will be the curtailment! The solutions to make the system more flexible are two-folds: supply side management and demand side management.

The report concludes by stating that the most sustainable solution to address curtailment is the adoption of storage systems. That would help ease out the stress on the generating sources to match demand profiles.

And moving forward, the report notes that India has already taken cognizance of the issues related to the increasing penetration of renewables and has proceeded with steps towards the right directions.