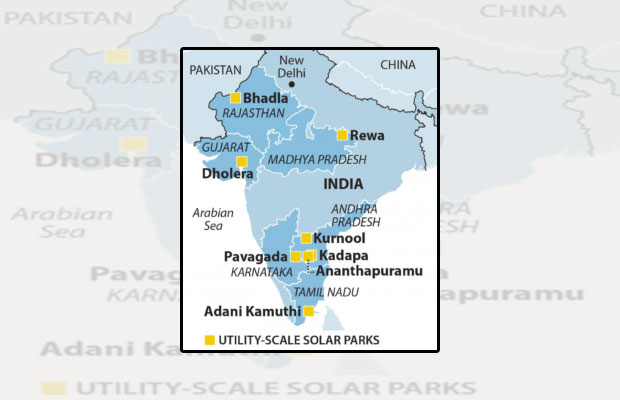 This has also provided investors with an opportunity to join a USD 500-700 billion renewable energy and grid infrastructure investment boom in the coming decade.

“This approach has driven economies of scale and attracted global capital into India’s renewable energy sector over the last five years, with an immediate boon in mid-2017 of halving solar tariffs to a record low of Rs2.44/kWh (USD 39/MWh) at the prevailing exchange rate,” said Kashish Shah, research analyst at Institute for Energy Economics and Financial Analysis (IEEFA) in the latest report – India’s Utility-Scale Solar Parks—A Global Success Story.

With an aim to transform country’s polluting fossil fuel‑based power sector into renewable energy-based low-cost, reliable and low-emission system, India sets for itself impressive targets of installing 175 GW of renewable energy by FY 2021-22 and 275 GW by FY2026-27.

In line with this, India introduced the development of ultra-mega solar parks across the country, however in this process, it overcame from various obstacles, said Shah.

In his report Shah further opined that “It is worth looking back over the last four years to see just how far the Indian renewable energy industry has advanced. Indian utility-scale solar parks have kick-started India’s energy sector transition.”

Despite multiple policy and project execution issues, India now houses number of ultra-mega solar parks with more than 1 GW of capacities, and 2 out of them are the largest commissioned solar installations globally.

The report further quoted that Rajasthan’s Bhadla solar park is the world’s largest such installation to date with 2,245 MW of capacity and covering over 14,000 acres of area.

Meanwhile, this UMPP concept involves a state government or local distribution company providing a single central grid connection and acquiring land on which the project can be built, shielding developers from procurement and time-delay risks.

Earlier, IEEFA in its report stated that policy certainty around renewable energy will increase domestic and international investment in India. Moreover, the opportunity cost of delaying India’s electricity sector transition is too high. With a few policy tweaks, India could be back on track to meet its’ ambitious target of 450 GW of renewables by 2030.