The UK has cemented its status as the global market leader in offshore wind, according to an analysis which puts it on top, followed by Taiwan and the US 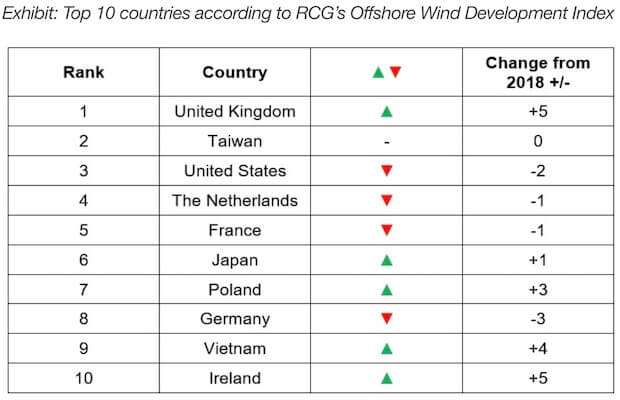 Further adding that the wider Asian market has experienced significant growth in 2019, covering various stages of offshore wind project development. Taiwan retained its position at second place in RCG’s OSWD Index, with continued progress towards its 2030 offshore wind target. The lowering of feed-in tariff (FiT) prices at the beginning of 2019 struck a balance between encouraging cost reductions whilst still providing a good level of support for new developments. Other markets in the Asia Pacific region have also made strong progress.

Leasing activity at the federal level in the United States may have stalled in 2019. However, the combined efforts of individual states continue to move the industry forward, with the award of substantial power purchase agreements (PPA) and ambitious new targets set for offshore wind procurement through to 2030.

A reduction in costs of offshore wind power generation has been driven by technological advances and increasing efficiency in the global supply chain. The introduction of larger turbines has reduced the levelised cost of energy for prospective projects. The floating wind market also continues to see innovation through the installation of new foundation design prototypes.

Overall, RCG’s outlook, from its Global Offshore Wind: Annual Market Report, is that the global market will hit, and maintain, a 6 GW per annum commissioning rate from 2022 onwards at least. Just under 20 GW of capacity has been brought online by the industry to date. Europe has been the dominant market so far; accounting for 98 percent of the global commissioned base.

Commissioning activity is expected to fall slightly in 2020 but is expected to rebound to c. 3.5 GW per annum in 2021. The report sees a significant increase in activity from 2022 onwards, to a rate of over c. 6 GW per annum, driven by projects in the UK, France, Taiwan, USA, and the Netherlands. 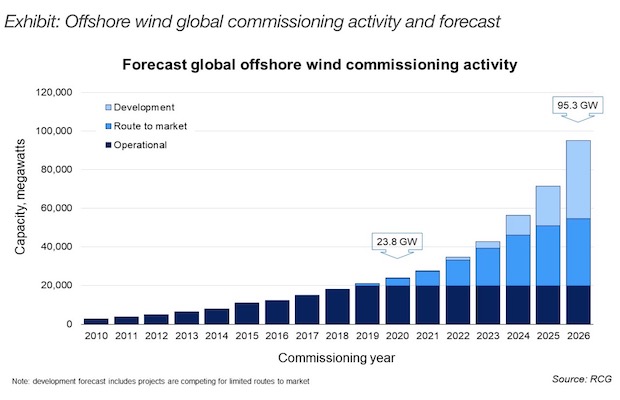 “There is an unprecedented and rapid transition underway in the energy system, requiring trillions of dollars of investment. Offshore wind power is continuing to establish itself as a cost-effective alternative to fossil fuel-based energy sources. RCG’s Offshore Wind Development Index provides an effective barometer of global hotspots for new offshore wind asset development. The latest rankings, published in our Annual Market Report, which contains a host of other data, reflect the fact that certain markets are maturing, whilst others power ahead,” said Lee Clarke, COO, RCG.