The U.S. energy storage market is anticipated to continue its exponential growth graph as storage continues to get cheaper, out-competing other resources. 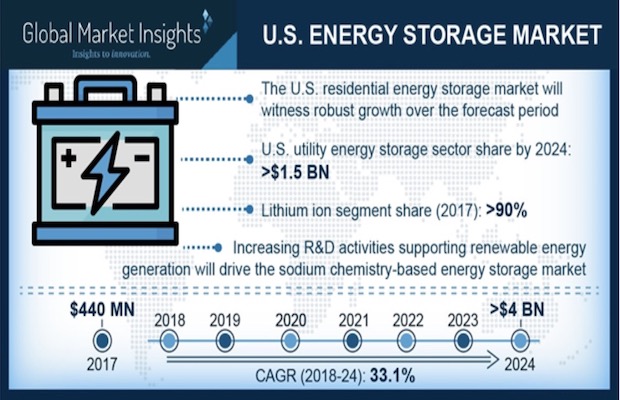 U.S. Energy Storage Market is set to grow from its current market value of more than USD 400 Million to over USD 4 Billion by 2024; according to a new research report by Global Market Insights, Inc.

The U.S. energy storage market share has been surging year on year as renewable energy utilisation comes to the forefront replacing fossil fuel energy sources. According to experts, energy storage can become a market disruptor as it is fast emerging as a new technology with enhanced capabilities and cost saving that no incumbent technology can even begin to approach. As a result, energy storage capacity across the U.S. seemingly surpassed 1,000 megawatt-hours in 2017, which is a record in itself and has nearly doubled in 2018 adding another 1,000 megawatt-hours of capacity. 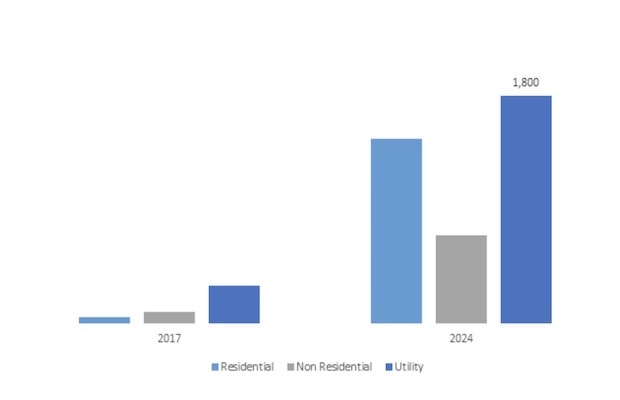 The U.S. energy storage market is anticipated to continue its exponential growth graph as storage continues to get cheaper, out-competing other resources, as a sea of change is registered in the mix of resources that run the power grid. Recent instances of contracts signed in the U.S. such as the NV Energy in Nevada and Xcel Energy in Colorado have also helped in furthering the prospects for U.S. energy storage industry.

While NV Energy has made it to the headlines with a contract to build 1000 MW of solar energy with 100 MW of storage, Xcel Energy has set a new solar-plus-storage record with a median price of $36 per hour which is lower than the cheapest PV-plus-battery power-purchase agreement till date by as much as 20%. Many other such developments are in the pipeline that will allow solar production to extend past sunset and into the evening when demand peaks, making it competitive in respect to energy supplied by natural gas or fossil fuel resources.

Not only lowered cost for renewable energy resources but also state policies will also contribute towards the deployment of energy storage systems and consequently the expansion of U.S. energy storage market, with more batteries being installed in homes, businesses and along the power grid. A fact that deserves special mention is that the U.S. home energy storage in 2018 witnessed more deployment than the front-of-meter storage deployment in the last quarter of the year. According to the U.S. Energy Storage Monitor, the residential segment led the way in energy storage deployment, growing tenfold year-over-year.

Concentration for residential deployment of energy storage systems have been most noticeable in two states, namely, California and Hawaii, which have together accounted for 72% of megawatt-hours in the last quarter of 2018 while Massachusetts with its new SMART program and Arizona, is expected to see some new tariff structures, and is a key contender for the third spot in the residential segment of the U.S. energy storage market.

The U.S. energy storage market has received a major boost from the fact that storage system costs have decreased roughly by two thirds over the last five years while more states have mandated utilities to procure storage systems. As consumers have come to realise that pairing batteries or energy storage with renewable energy projects improve reliability of power supply without creating greenhouse emissions, more homeowners and businesses are showing preference for power with backup energy storage and the option to capture and store excess energy produced in rooftop systems which can later be utilised after sundown, or when the wind is not blowing.