Speaking at the event, Co-President ISA and the French Minister for ecological and inclusive transition, Brune Poirson thanked India for its leadership in the field of solar energy. 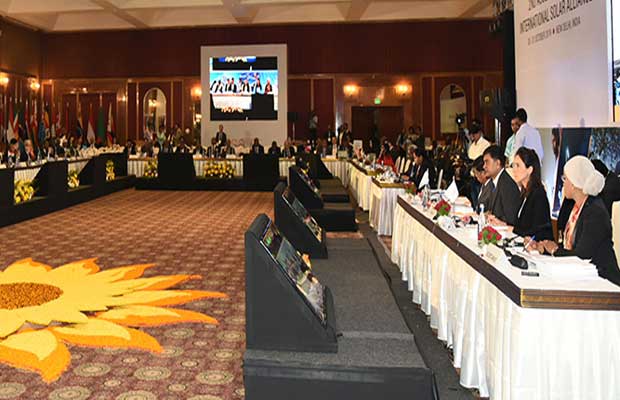 The two new countries, Eritrea and Saint Kittis and Nevis, have now become the member of International Solar Alliance (ISA) after signing the framework agreement on Thursday.

Now with the signing of ISA framework agreement by an East African country and a Caribbean country, the list of total member countries reached to 83. The agreements were signed during the second Assembly of ISA in New Delhi. The event was hosted by the Ministry of New and Renewable Energy (MNRE).

While speaking during the event, President of ISA and Power, New & Renewable Energy and Skill Development Entrepreneurship Minister, R.K. Singh emphasized on the increasing importance of solar energy.

Singh further added that, this is very important in view of the climate change issues faced globally.

It further added that, the Assembly also has participation from important ISA partners, and other invitees.

Speaking at the event, Co-President ISA and the French Minister for ecological and inclusive transition, Brune Poirson thanked India for its leadership in the field of solar energy.

Poirson also talked about the ISA objectives which included lowering the cost of energy, increasing investment in the renewable energy, and training and sharing of knowledge and technological knowhow among the member countries.

Meanwhile, at the UN Climate Summit this year, Prime Minister Narendra Modi pledged to increase renewable energy capacity to 175 GW by 2022 and committed for further increasing it to 450 GW.