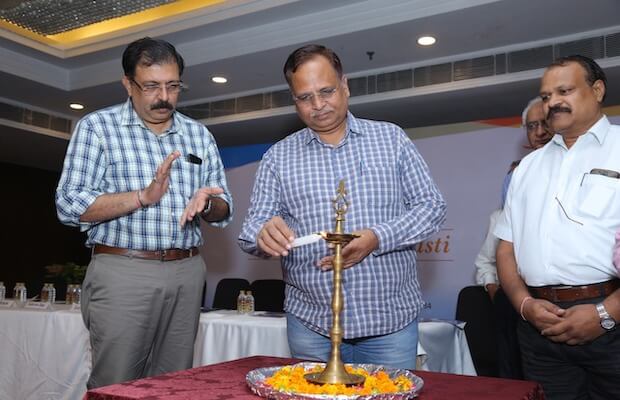 Power Minister of the government of NCT of Delhi, Satyendra Jain addressed the gathering, highlighting several initiatives being taken by Delhi Govt. and Tata Power DDL to promote clean energy. More than three hundred representatives from RWAs across North Delhi attended the programme.

Residential Sector has to play a big role in solar power development in Delhi. There is a huge potential, but so far, solar development in this sector is yet to catch up. Delhi Govt. is giving a Generation Based Incentive of Rs 2.00 per unit of solar generation for the first 5 years. Also, 30% of capital subsidy is provided for Domestic Consumers, Housing Societies, Institutional & Social Sector in IPGCL scheme. This is both for CAPEX and RESCO mode, where Tata Power-DDL consumers do not have to make any upfront investments.

The company has conducted several workshops in 60 + RWAs in its area. And is geared up for mass adoption of rooftop solar by its consumers through a favourable policy environment in Delhi.

As on date, 656 consumers in the company’s distribution area have installed rooftop solar with a total capacity of 25 MWp. 324 of these consumers are Domestic Consumers. However, as per a study was done by the company with USTDA, the estimated rooftop solar potential in North Delhi is 400 MW.

“The discom has always been focussed towards combating climate change, energy savings & peak load reduction through the use of solar and by providing value added services to its consumers by facilitating solar rooftop projects. The company has created ‘Solar Brand Ambassadors’ among its consumers who have pioneered solar projects in their respective areas,” the discom issued in its statement.

The company provides a single-window solution for consumers where all benefits for a solar project, solar calculator, and registration for installation of the solar project can be made by consumers through its Solar Microsite.

The company is also working with World Bank and the US – India Collaboration Project for promotion of rooftop solar among its residential consumers and with GIZ& Tata Cleantech to promote Rooftop Solar among Industrial and Commercial consumers as well.

Commenting on the initiative, Sanjay Banga, CEO, TP-DDL said that the company is in full support of the state government’s vision of solarising Delhi and that it is constantly working for the same.

“We strongly support the Delhi government’s vision to Solarise Delhi and believe that this initiative will go a long way in promoting the use of clean power. TP-DDL has been an active participant in the promotion of solar energy. We are constantly working towards providing clean and green energy to our consumers and encouraging them to harness solar power in order to ensure energy security for all.”

TP-DDL has been actively involved in the promotion of Rooftop Solar Projects and has been conferred with several awards including the ‘National Award for Promotion of Rooftop Solar Programmes’. Tata Power-DDL has also been awarded numerous accolades for implementing energy efficiency improvement projects including the ‘National Award for Excellence in Energy Management’ as an ‘innovative energy-saving service’ by the Confederation of Indian Industry (CII).