Home » News » The Plan is to Power the Entire Agriculture Sector With Solar: RK Singh at RE-Invest

The Plan is to Power the Entire Agriculture Sector With Solar: RK Singh at RE-Invest

India’s plan is to rapidly take forward the idea of solarising its agriculture sector, and not just stop at solar pumps but cover the entire value chain. 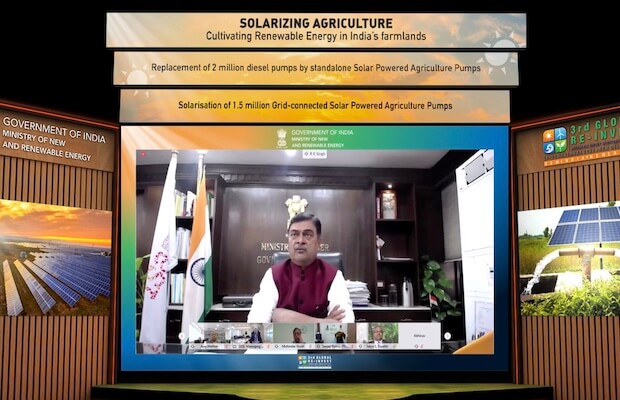 Agro-PV offers an opportunity to enable the achievement of both sustainable agriculture and clean energy transitions. Decentralised and distributed renewable energy solutions including solar-powered irrigation can significantly contribute towards decarbonising electricity generation without any additional investment in transmission infrastructure. However, India’s plan is to rapidly take forward the idea of solarising its agricultural sector, and not just stop at providing solar pumps to farmers but moving forward to agricultural feeders, and then the entire value chain.

During the session, ‘Solarizing Agriculture: Cultivating Renewable Energy in India’s Farmlands’ at the ongoing 3rd RE-Invest conference, the flagship event of the Ministry of New and Renewable Energy (MNRE).

During his address, RK Singh, Union Minister for New and Renewable Energy and Power, said that the ultimate objective is to take our entire agricultural sector to solar power, and that will entail the establishment of 30 GW of solar power capacity. The idea that started with providing 2 million solar pump replacements for the diesel pumps and then solarising a further 1.5 million grid-tied pumps under the KUSUM scheme, has been expanded or revised now and the focus has also shifted towards agricultural feeders.

The idea is for these projects to provide a 30 percent central subsidy and the remaining 70 percent of the funding be made using loans from NABARD or PFC, etc. So, the state and the farmers do not have to put forward any money at all. And, the loan is a 5-year flat loan, which the states can pay from all the funds that they will be saving from not paying the state subsidy for the projects. And, crucially, the farmer gets free irrigation from day 1.

The minister believes that in this situation, the state governments’ will be the biggest gainers. As they save on the subsidies, and beyond that. Agriculture often needs close to 100-150 days of irrigation. Besides those, the 200 days of power generation by the systems can be directly sent to the State Discoms for free, which will have a massive impact on their overdues.

Beyond this, a system will also be created where the farmers can try and save power, and they are then paid for the amount of power they save and feed to the grid.

“As this model progresses, the power costs for everyone involved will come down, and beyond one great advantage will be that we will be able to even protect and conserve our groundwater levels as well,” the Minister added.

Satya S Tripathi, UN Assistant Secretary-General and Head of New York Office, UN commended India on its achievements so far. And mentioned that “India is the only G20 country on the pathway that is comparable to the pathway guidance discussed and agreed under the Paris agreement which was to limit temperature to 2 degrees. It is phenomenal that India is actually on the pathway, and meeting their NDCs.”

At this point, a few ingenious business models were discussed by Saurabh Kumar, Executive Vice Chairman, Energy Efficiency Services Limited. The working example of which is the work EESL is doing in Maharashtra where its 100 MW + of solar capacity from over 106 sites is being used to offsets the agricultural tariffs. Binging them down from Rs 6.8-7 to Rs 3.4-3.6/kWh.

He then discussed the proposal for bundling services under one combined power purchase agreement (PPA) that will be signed with the state authorities. For example, the first such agreement that EESL has signed with the Government of Goa, which includes replacing pumps with solar pumps and also providing solar home lights to households for a combined Rs 3.60/kWh. This price can be further reduced by introducing more financing mechanisms, one of which is the loan it has secured from the Asian Development Bank.

Dr. Ajay Mathur, Director General, The Energy and Resources Institute (TERI) discussed the ways in which “we will be able to monetise the benefits under the solarisation of the agriculture segment, into incentives for the investor.” And two main ideas discussed were Carbon Credits and Green Equity.

At the conclusion of the session, RK Singh said that the Financing of the scheme has not been an issue. “That finance (Central Subsidy and Flat Rate Loan paid by states) has been tied up already. However, after listening to the panelists I’ve learned about more ways of finance which we should be definitely be looking at, maybe if we add these, then the cost for the state’s will come down even further.”

“My objective is ultimately to mix component C and B. Solarising everything pumps and feeders. And I want say that we are confident that 100 percent of the targets under the scheme will be achieved by 2025, around 55 percent by 2023. It is a challenge, and we will achieve it.”