The Case For Storage Is a Tough Sell At Reinvest 2020

RE-invest 2020’s session on battery storage, with a focus on innovation and sustainability, sent out mixed messages on the potential for, and need for battery storage in India.

Thus, while some of the panelists drove home the point that long term storage was not really a requirement for India yet, considering the little gap between peak demand and supply, others stressed on a more pragmatic approach to the elephant in the room, ie, what to do with the high thermal and gas based asset base that has yet to outlive its rated life or generate adequate returns. Consider that for a peak demand of 180 GW, India already has close to 370 GW of installed capacity of various means, with a large segment of thermal and gas assets lying idle or operating at sub-optimal loads. The session also missed the perspective of a very important member, Sumant Sinha, Chairman and Managing Director of ReNew Power, which has won some of the largest storage linked tenders recently, as he was unable to attend.

Moderated by Fabian Wigand, Associate Director, Energy, Sustainability & Infrastructure, Guidehouse Energy Germany GmbH, the session ended with cautious optimism on the situation changing in the next few years, by which time, both storage costs as well as demand situation might improve significantly enough to make a difference.

One of the few areas of consensus was the appreciation of SECI, for taking on the risk to experiment with its RTC and peak supply auctions early enough, to suss out the market and support the establishment of a long term benchmark rates.

Jatindra Nath Swain, Chairman and Managing Director, Solar Energy Corporation of India (SECI) was also a member of the panel. Swain spoke on how RPO (renewable Power Obligation) is one driver for RE power, aligned with the massive drop in costs to effectively 2.80 per unit on average. He flagged the issue of older thermal plants that are unable to back down below 55 percent PLF even as RE power in the grid goes up. So discoms incur a fixed charge on these thermal plants currently, during periods of subdued demand, as we have seen through almost all of 2020. His prescription was for demand management. Giving the example of states being asked to shift agri demand to day time to manage demand better. Single shift industries can also do that . Pointing to the  large gap between peak summer and peak winter demand in the country, he expressed the apprehension that using battery storage to manage such peaks may not really work. Till an ancillary services  market developed like in the west. 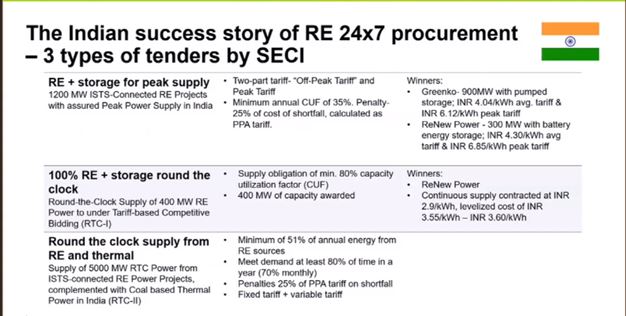 Ranjit Gupta, Chief Executive Officer, Azure Power  reminded panelists that in a price sensitive market like India ,discoms find it a struggle to buy power from even hybrid projects currently. Adding batteries to this layer, will only make the cost higher. Pointing out that variability of renewable power is still manageable due to large size of wind and solar projects today, it was despatchability  that needed demand management. Storage through pumped storage or other innovative structures like RE + thermal is great. When looking at despatchable power, discoms can start thinking about costs by comparing it to the cost of  building a new thermal plant. But even with that, storage based power could go up to Rs 5 or more, as we have seen in the few tenders that have been awarded. Thus, his view was for a period of patience as storage costs come down further, before that can make a string vase for viability.

Rupam Raja, Market Director, India & SE Asia, Fluence highlighted the 10 MW one hour battery storage plant in Delhi, active for about 10 months now. “Its giving a lot of info to help make policy. The challenge is while we have given discoms the option to contract renewables for RTC (Round the clock power), what we have not done is create a viable option where they can get away from signing a fixed contact for a firm capacity. So they need to get out of the fixed costs for fossil fuel alternatives. Just focus on peaking need, such that discom does not have to sign a firm capacity contract with a gas or coal-based supplier, then you will see true value of a battery storage solution”. Asked about the recent Mumbai power outage of October 12, he stressed that it all boils down to considering a battery for such situations as a fixed T&D cost.

Mahesh Kolli, Joint Managing Director, Greenko Group, which won the largest chunk of SECI’s storage plus Renewable project also had his issues with battery storage. Voting for pumped storage at this stage. “In Karnataka RE penetration has gone from 6 percent in 2015 to 50 percent in 2020. Average cost of energy increased from Rs 3 to Rs 4, forcing the discom there to virtually halt any fresh RE additions since 2018-19. On the storage front, pumped storage comes at around $70 per MW h, versus battery which is much higher at a minimum of $130 /MWh currently”. He suggested considering a move like a Storage Portfolio Obligation for discoms, much like the RPO’s dricing renewable growth for now, as a possible starting point to ensure a start with battery storage in India.

Nawal Saini, Managing Director-Renewable Power, Brookfield, one of the largest investors in Re worldwide at close to 20 GW said that it was not a matter of if, but when battery storage comes into its own.

He stressed on deeper understanding of energy consumption patterns, and possibly short term energy contracts for peak loads, to create a viable market for storage.

Stressing on bankability as an investor, he complimented the Indian authorities for a good job through SECI and NTPC to provide foreign investors the comfort of bankability. “As we look to integrate more and more storage into our grid, it is critical to have a payment security mechanism upfront. What you don’t want is issues on long term contract” This was to cover for the certainty of prices coming down in the future, and tempting discoms to go back on contracts signed earlier, as seen by the Andhra case since 2018-19.

S Vijayanand, Chief Executive Officer, Amara Raja Batteries spoke from the manufacturer’s perspective. “The traditional storage manufacturing capacity is about 55-60 GW of manufacturing, largely lead acid GWh capacity. About 25% of this goes to what I will call micro applications. Homes, offices, telecom networks etc. Interface with RE is fast evolving to be an attractive proposition. The tech challenge we have is how much of the energy generated do you want to store and discharge for demand requirement. That will determine cost of storage.

The 24×7 RTC kind of application opens up a very interesting proposition of combination battery storage to come on the table. While li-ion is good on energy density and fast recharge, when it comes to round trip efficiency, high cycle rate, and agility in both charge and discharge cycles, lead acid batteries or other chemistries can also work. We havelooked at creating hybrid solutions. Like marrying a low cost option to stable , long time discharge versus high cost for short term discharge. Overall optimise the total cost. Maybe even in combination with pumped storage”.

“As costs for battery storage go below $100/MWh, then policy framework needs to identify those benefits and factor it in as part of the regulatory mechanism. Globally we still haven’t seen scaling up to the level“, he added.

Rohan Patel, Senior Global Director, Public Policy and Business Development, Tesla stressed that any discussion on storage costs needs to take into account the subsidies fossil fuels still get in many parts of the world. “Perceptions of high energy storage cost don’t include full life cycle. Avoided costs, like round trip efficiency. Quoting the example of the Hornsdale power reserve in South Australia, he stressed that  it has reduced both network cost, delivered efficiency gains, and 90 percent reduction in grid regulation cost. “Stressing that no other power source can provide the speed of response that large battery storage today does, he stressed on the need to develop an ancillary services market for battery operators to recover their investment faster.