Moreover, this MNRE and GIZ-backed program will be implemented in four states i.e. – Gujarat, Uttarakhand, Himachal Pradesh, and Jammu & Kashmir along with two Union Territories – Daman and Diu; and Dadra and Nagar Haveli. 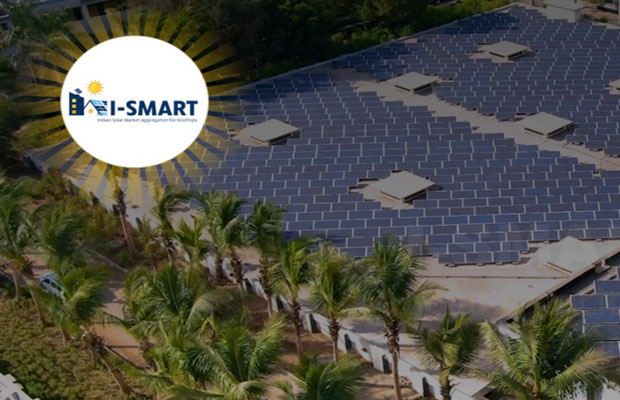 With an aim to simplify the installation of rooftop solar for both domestic as well as business consumers in India, country’s one of the leading energy and environment think tank, The Energy and Resources Institute (TERI) in association with Cadmus Group has launched a program called ‘Indian Solar Market Aggregation for Rooftops’ (I-SMART).

Cadmus Group is the United States based technical and strategic consultancy services provider for wide areas such as energy, water, transportation to safety, security, and resilience.

The motive behind this demand aggregation program is to speed up the demand for rooftop solar systems of 1 GW capacity across 4 states and 2 Union Territories.

Also, it is expected that this Ministry of New and Renewable Energy (MNRE) and Deutsche Gesellschaft für Internationale Zusammenarbeit (GIZ) GmbH backed initiative will help in achieving country’s ambitious target of 40 GW by 2022 as around 3.85 GW of rooftop solar has been achieved yet.

Further, this I-SMART program is a part of the Indo-German Solar Energy Partnership. For more than 60 years GIZ has been working in association with Indian partners for sustainable economic, ecological, and social development.

He further added that, “GIZ is now supporting demand aggregation for rooftop solar systems with an objective to double the installed capacity and number of projects in select states.”

Moreover, this MNRE and GIZ-backed program will be implemented in four states i.e. – Gujarat, Uttarakhand, Himachal Pradesh, and Jammu & Kashmir along with two Union Territories – Daman and Diu; and Dadra and Nagar Haveli.

Speaking on the development, TERI, Senior Director of Renewable Energy Technologies Division, Dr. Ashvini Kumar said, TERI’s experience in working throughout the value chain of rooftop solar systems combined with that of Cadmus’ successful Solarize campaigns in the US would help scale up the rooftop solar market in the targeted states.

In order to make this program successful, TERI has planned to work on the grass root level through launching digital/social campaigns.

Under this program, a single-window web portal will help consumers in understanding relevant information about rooftop solar installation before they submit an online request for the same.

Besides, I-SMART will help in connecting both solar developers and consumers. It will also simplify its installation process and raise awareness via targeted outreach among common man.

Meanwhile, the I-SMART team is also planning to engage college students as volunteers and will be called as Solar Friends. These Solar Friends will be trained by the project team and will carry out door-to-door outreach and appeal to the people to install solar rooftop panels.