The failed developments for the sale of stake of GCL to SEG also led shareholders to a negative intuition about the company’s future reliability thereby forcing a share-sell. 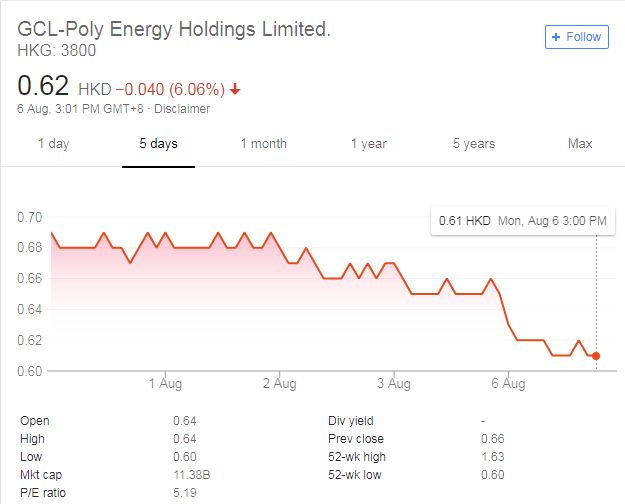 World’s leading solar panels materials maker, GCL Poly Energy is expected to face high selling pressure on its share market on the back of the collapsed talks regarding the sale of its 51 % stake to China’s state run Shanghai Electric Group (SEG) for up to 12.75 billion Yuan (around US$1.9 billion).

The failed developments for the sale of stake to SEG also led shareholders to a negative intuition about the company’s future reliability thereby forcing a share-sell.

The failure of the talks has impacted not only GCL’s attempt to raise funds to cut debt but also Shanghai Electric’s plan to further diversify away from its fossil fuel-driven business.

Filing to Hong Kong’s stock exchange, GCL said, “In view of the size and complexity of the transaction, the parties found it difficult to reach a full agreement on the relevant terms and plans for the potential disposal in a short time frame.”

Head, Hong Kong and China Utilities Equities Research, Daiwa Capital Market, Daiwa Ip said,  “For GCL, controlled by mainland tycoon Zhu Gongshan, the intended disposal would have allowed it to declare a ‘special’ dividend after not having declared any dividend since 2015, improve its financial health and ease solvency concerns.”

On the other hand, Shanghai Electric Group has claimed in another filing to the stock exchange that the company has faced serious downfalls selling the coal-fired power related equipment. The deal of stake in GCL would come along switch of old growth drivers with new ones such as more reliability over solar energy.

Further, the news of the drop of the talks might come as a relief to some of the SEG’s shareholders.