Home » News » Storage Emerging As Issue For Europe’s RE Growth

Storage Emerging As Issue For Europe’s RE Growth

Europe, which has covered a lot of ground in terms of share of renewable energy in the grid, risks losing the advantages that should flow from these investments, says a report by research firm Woodmac. (Wood Mackenzie). Storage as a key driver is an issue we have also flagged earlier, at SaurEnergy in our October cover for the magazine, for an India context.

The report comes at a time when large comparable markets like the US and China have pushed aggressively for hybrid, or storage linked renewable capacity, besides subsidies for behind the meter storage too. These moves are aimed at providing their grids a lot of flexibility in terms of demand management, as renewable energy share continues to grow. Importantly, storage at scale and at the right price is the only way for renewable energy to compete with ‘baseload’ power, where thermal, gas-based, nuclear and even Hydro easily outcompete it for now. One reason why global storage capacity is expected to grow to almost 750 Gwh by 2030.

Government auctions need to incentivise flexible power, or storage backed renewable capacities, to ensure it gets the most from its renewable energy generation, the report adds. ” While delivering low-cost, low-carbon power in abundance, the non-dispatchable nature of VRE presents a flexibility challenge for power systems. Particularly over the 2020 coronavirus lockdown months, we witnessed the impact of high VRE on the system, resulting in low and negative power prices. This points to a lack of system flexibility”.

“Energy storage will be at the forefront of meeting this challenge, as the technology can provide much-needed flexibility with zero carbon emissions, while keeping power prices more stable and affordable for the end consumer,” said Rory McCarthy, Wood Mackenzie Principal Analyst.

The front-of-the-meter (FTM) hybrid storage market, or battery storage at the power producer/generator level  which is key to energy storage success, has seen a similar trend over the last three years. This is where Europe has lagged.

“If we look at the US, which is the largest storage growth market, the pipeline in this region has the potential to make up 49% of global cumulative GWh capacity by 2030.

Vertically integrated utilities – those who can be a retailer, network operator and generator under the same organisation to serve a large swathe of US consumers was one big reason cited for the higher storage capacity in the US.

“These utilities can assess their whole system portfolio, operational and delivery requirements and run a tender on that basis. Ultimately, they can contract with the lowest cost combination of technologies to deliver a whole system solution, therefore giving the best investor return while ensuring high quality power is delivered.

Europe’s standalone or hybrid project pipeline is small compared to the rest of the world due to a market liberalisation that has brought about decoupling within the power sector.

“So, the case for storage in Europe is defined by the wider market players. Not – as in the US comparison – a top down utility assessing the best whole system solution. The proposition is on a merchant basis with higher risks and financing barriers,” said McCarthy.

However, some steps are afoot, with the European Commission now pushing for fair energy storage participation in capacity and ancillary markets through its Clean Energy Package.

With government backed auctions offering the best route to VRE (Variable renewable Energy) , not enough has been done to start preparing for a future where share of renewable energy in the grid crosses key thresholds. These are thresholds beyond which, without storage, power costs can plummet to unsustainable levels due to demand mismatch. LIke zero or nagative prices seen in Germany, and even the UK earlier this year. 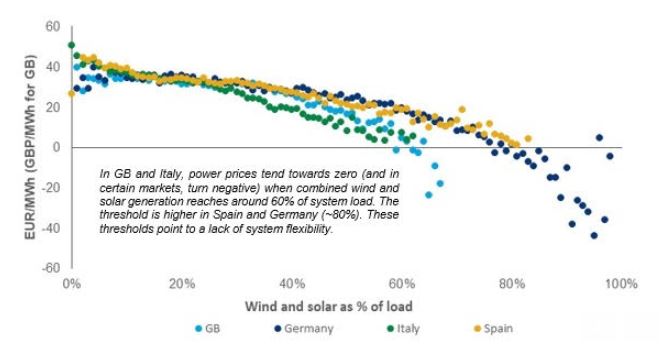 Corporates are expected to make a difference with Hybrid PPA projects as they value the importance of true net zero power. So rather than claiming 100% renewables through PPAs and renewables credits but real-time, 24/7, consumption of power with renewable generation. Or round the clock (RTC) renewable power.