After announcing its 2030 goals of achieving 70% electricity through renewables, Sri Lanka is now accelerating its investments in rooftop solar and planning to rule out new coal power investments.

Sri Lanka‘s renewable energy sources currently are primarily HydroPower, which accounts for 35% of its electricity from renewables in 2019. The country has total generation capacity of about 42 GW from all sources and peak demand of about 2500 MW.

Currently, the Island has a single 900MW coal power station, built with Chinese backing in 2006, which meets over a third of electricity demand. Plans for a second coal plant, to be financed by India, were suspended in 2016 after environmentalists filed a legal challenge. 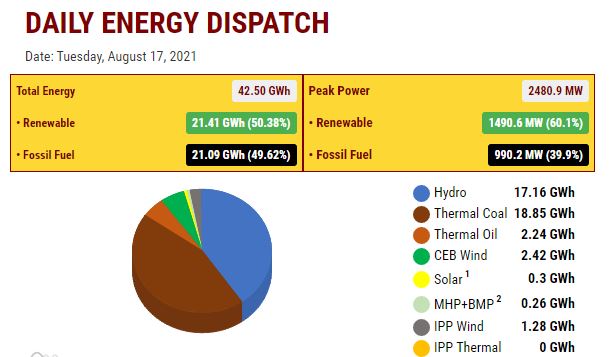 Ruling out new coal power contributes to a target to cut the Island’s greenhouse gas emissions by 4% from business as usual by 2030 with national investment and up to 10.5% with international support. The Lankan government aims to have a carbon-neutral electricity generation system by 2050, according to the document submitted to UN Climate Change last month.

Also, for increasing investments in rooftop solar, the government is urging local Lankans to install rooftop solar power by offering loans with at most a 4% interest rate. Asian Development Bank (ADB) has funded this scheme with a $50m loan.

This step comes after receiving a USD 100 million Line of Credit (LOC) from India for various solar energy projects announced for the island nation. That including those during the Founding Conference of the International Solar Alliance (ISA) held in March 2018, such as rooftop solar photovoltaic systems for households and government buildings.

A key policy of the government is to generate solar power by installing rooftop solar on state-owned buildings, places of worship, and houses of low-income families. This would facilitate measures that have been taken to increase the contribution of renewable energy sources to the national power grid, officials said.

Subsequently, for those solar projects, Sri Lanka announced to purchase the equipment and materials from India itself. That USD 100 million LOC is a 15-year loan of a fixed rate of 1.75% and that within 15 years, from the Export & Import Bank of India. Far better terms than what the island nation was getting from China.