SolarReserve has partnered with Sandia to test and validate advanced heliostat designs for its utility-scale solar thermal power stations. 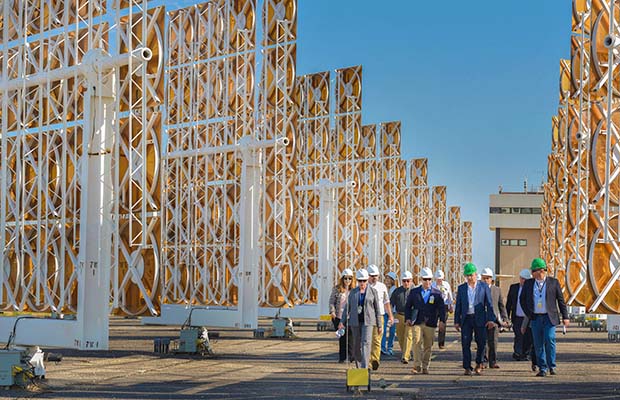 Sandia’s researchers and leaders, government representatives, and industry leaders joined together for a day of talks and tours focused on the facility’s history, and its role in solar energy and other fields and the present research perspective.

Chief Executive Officer, SolarReserve, Kevin Smith spoke at the event, “Celebrating the 40th anniversary of the National Solar Thermal Test Facility reminds us all of the important work that the Sandia team has done to advance American innovation in solar thermal technology. Through their efforts, and our partnership with them, breakthrough solutions for cost-effective sustainable energy now and in the generations to come are being developed. New industries are being fostered, and U.S. jobs created by the thousands. We look forward to many more years of collaboration with Sandia on solar thermal technology development.”

For over 10 years, SolarReserve has partnered with Sandia to test and validate advanced heliostat designs for its utility-scale solar thermal power stations. Heliostats are the large dual-axis tracking mirrors that concentrate and focus the sun’s energy onto a receiver atop a central tower.

Within the receiver, fluid flows through the piping that forms the external walls; This fluid absorbs the heat from the concentrated sunlight. In SolarReserve’s technology, the fluid utilized is molten salt, which is used both as a heat transfer fluid as well as a thermal energy storage medium.

Paul Gauche, manager of Sandia’s National Solar Thermal Test Facility remarked: “The CSP team at Sandia has worked side by side with SolarReserve since their founding and we look forward to assisting them as they embark on several large projects around the world. This special relationship has its foundations in the pioneering molten salt research led by Sandia labs in the 1970s and we anticipate history repeating itself in Gen3 and beyond.”