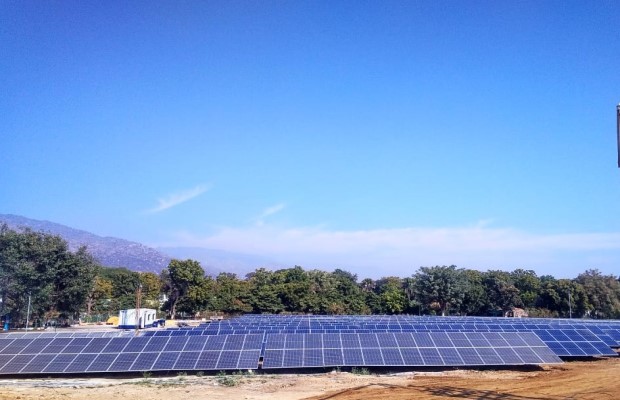 Modern Insulators is an arm of the Modern group of Industries and was set up in 1985 in collaboration with Siemens, Germany.

While sharing further details about the project, Prateek Agrawal, Co-Founder of Solar91 Cleantech Pvt Ltd, told to Saur Energy, that, “this project has been built under captive mechanism having an aggregate 8,340 numbers of 355-365 Wp solar PV modules along with 24 in quantity 125 KVA Delta inverters.”

Agrawal further added that “the modules which we have used in this plant are supplied by Canadian Solar with half-cut poly perc technology which is the latest technology in the Indian solar market.”

Commenting on having a solar energy plant installed at the company premises, P.K. Gokharoo, President of Modern Insulators Ltd, said that “I am delighted to have our first in-house solar power plant at our Abu Road manufacturing unit. I believe this will encourage other companies too to get a solar plant installed at their premises to harness clean energy and contribute to saving the environment.”

“This project will reduce our electricity bill up to a greater extent by generating electricity at our premises itself without emitting any polluted gases. This will generate around 4.5 million units of electricity annually, and the project was erected under the supervision of our Deputy Manager, Mr Vijay Modh,” said V.S. Rao, Vice-President of Modern Insulators Ltd.

Solar91 Cleantech Pvt Ltd was founded in 2015 in India while sharing about company’s achievements in just five years, Sandeep Gurnani, Co-Founder of Solar91 Cleantech Pvt Ltd, said “we have worked with more than 50 clients across 9 states, and has successfully completed over 70 residential, commercial and industrial (C&I) projects including few in Africa and Dubai too. We continue working, diligently and relentlessly because we believe, the future of solar is bright.”