The Solar PLI tender, (Production Linked Incentive)  where IREDA is the implementing agency, has received a massive response from bidders, with just 9 bidders going for 4 GW capacity creation each. Another 9 bidders make up the remaining bids for 18,809 MW of capacity building. (View Scheme Details Here)

The PLI Scheme has divided an elaborate marking scheme for bids, with a focus on backward integration. Minimum allowed bids were for 1000MW and higher. Manufacturers who propose to set up a fully integrated solar PV manufacturing plant using silicon based technology (starting from the stage of manufacturing of polysilicon, to Ingot/Wafer to Solar Cell and Module) or fully integrated Thin Film technology or any other technology. However, in order to qualify for the bid, the applicant manufacturer will have to promise minimum integration across solar cells and modules too. Going by the list, it is obvious that only bidders over 4000 MW might have a real chance. 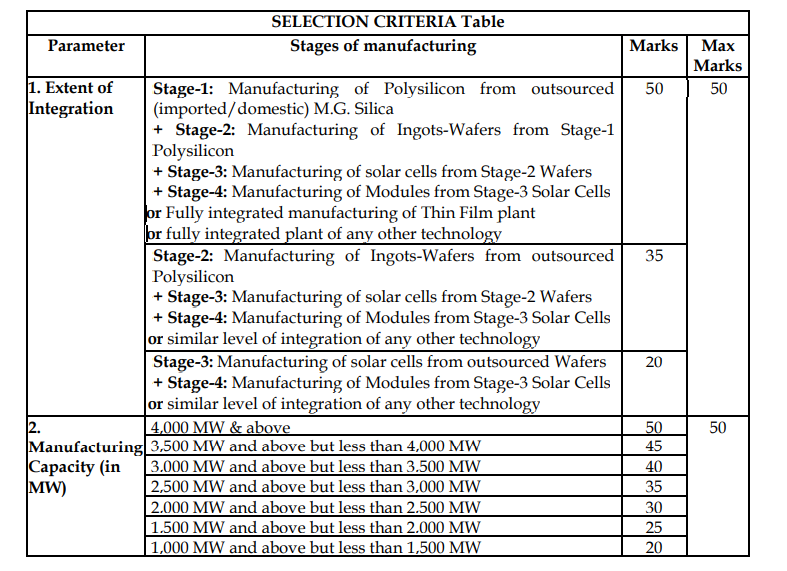 The bidders list going around right now indicates 4 GW bids across all stages (1-4) from the Adani Group, Reliance New Energy, Jindal Group, and the Shirdi Sai Electricals Group, a transformer and EPC contractor from Andhra Pradesh. First Solar of the US, has bid for 3009 GW of capacity across all stages.

Coal India, Larsen And Toubro and Renew Power have also bid for 4 GW, while omitting any stage 1 commitments, while Tata Power and Waaree Energies have stuck to their existing competence and bid 4 GW each under stage 3 and 4 only.

Other bidders at lower capacities include some of the biggest names in the business, from existing manufacturers like Vikram Solar (3600 MW), to Acme Solar, Avaada, Emmvee, Megha Engineering, Jupiter and more.

While it might seem like the odds are in favour of the heavy bidders, it might yet throw up some surprises, depending on the specifics of each proposal. But either way, the government will be satisfied that the solar PLI scheme seems well on its way to achieving its purpose. With an overall PLI limit of Rs 4500 crore, this one does look like it will be exhausted in double quick time,  IREDA of course, for its troubles, will be eligible to get 1% of the PLI amount disbursed as administrative charges on annual basis.

While a module efficiency rule of 19.5% has been specified, manufacturing units which have imported capital goods for setting up the module manufacturing facility before the last date of bid submission are not be eligible for participation under the PLI scheme. Which means actual capacity additions, irrespective of the PLI scheme, will also be quite significant, considering recent additions done, and more expected by December this year.