High temperatures are no longer required to coat things with a photovoltaic layer, thanks to Olga’s Inkjet Processing Method. 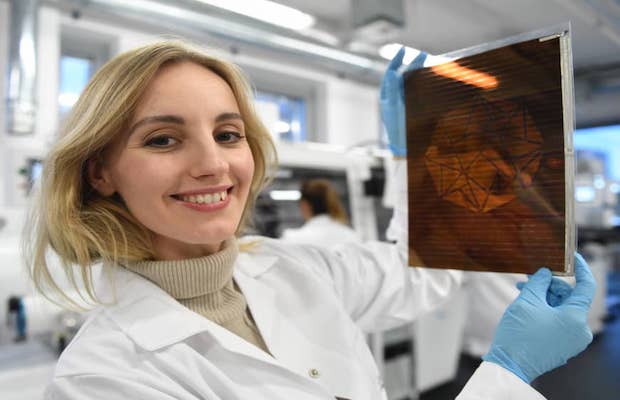 A novel inkjet processing method for perovskites (a new generation of cheaper solar cells) developed by a Polish Physicist and Businesswoman, Olga Malinkiewicz, makes it possible to now producing solar panels even under lower temperatures, drastically bringing down costs of mass production.

The perovskite panels which are on track to revolutionise access to solar power for all, given its wide array of advantageous physical properties.

These solar panels coated with the mineral are light, flexible, efficient, inexpensive and come in varying hues and degrees of transparency. And, can easily be fixed to almost any surface to produce electricity, including in the shade or indoors.

Initially, the process of coating the mineral was complicated and required ultra-high temperatures, so only materials that could withstand extreme heat (glass) could be used. This is where Malinkiewicz’s printing technology comes in.

In 2013, while still a Ph.D. student at the University of Valencia in Spain, she figured out a way to coat flexible foil with perovskites using an evaporation method. Later, she developed the inkjet printing procedure that lowered production costs enough to make mass production economically feasible. “That was a bull’s eye. Now high temperatures are no longer required to coat things with a photovoltaic layer,” Malinkiewicz told AFP.

She then went on to co-found the company Saule Technologies along with two Polish businessmen. And have since brought Japanese multimillionaire investor Hideo Sawada on board. The company now has an ultra-modern laboratory with an international team of young experts and is building an industrial-scale production site.

Eventually, compact production lines could easily be installed everywhere, according to demand, to manufacture perovskite solar panels that are made to measure. Malinkiewicz insists that the initial cost of her products will be comparable to conventional solar panels.