Home » News » Solar Installations in Q1 2020 Slowed Down in India, China and US: Report

Solar Installations in Q1 2020 Slowed Down in India, China and US: Report

According to a new report, Q1 of 2020 has been a particularly lousy installation period for solar panels with just 15.8 GW getting installed.

According to a new report, quarter 1 (Q1) of 2020 has been a particularly lousy installation period for solar panels with only one quarter in the past 9, being lower with just 15.8 GW getting installed. The only quarter below this level was in Q3 2019, when China previously installed a record low for the past 5 years.

The figures have been issued in a report by Rethink Energy, which has collated the figures for solar developments in the first quarter of 2020, based on government and other sources for the sixteen most important global markets.

As per the quarterly tracker, those sixteen countries installed just 15.8 GW in Q1, a little more than half of the 31.6 GW installed in the immediately prior quarter, and 1.2 GW less than this quarter a year ago. All of this is placed at the door of Coronavirus, but its impact will likely fall even more heavily in Q2.

The coronavirus impact varies wildly between nations – South Korea, which has already released its Q2 statistics, is rocketing ahead with installations, while April and May have been very slow for India. 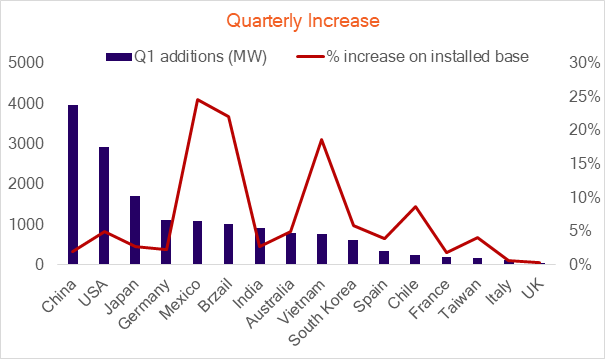 Of the four biggest markets, China did poorly, but remained in number one spot on 3.9 GW, unlike in the Wind market where it had to concede that honour to the US. The US did well, coming in at 2.9 GW and only three other countries, Germany, Japan and Mexico came in above 1 GW.

The report detailed how India is having a bad time compared to both past performance and its ambitious near- and long-term targets. And the central government will need to accelerate reforms and put its weight behind more transmission infrastructure if it wants to get anywhere near its long term targets. Japan continues strong on smaller-scale systems with battery storage, and like China, is seeing a mild overall decline prompted by a slight reduction in subsidies.

All of the second-tier markets are seeing strong growth, or just steady in Germany’s case. Brazil and Mexico are standouts, both increasing their capacity more than 20 percent in Q1 alone. Vietnam’s sudden boom continues but will be slanted more towards the end of the year.

In the third tier, Chile and Taiwan have both recently embarked on rapid growth, while Italy, France and the UK have slowed from comparatively aggressive histories in solar. France is tipped to rise back above 1 GW annually this year, and both France and Italy have carbon targets which will require that kind of accelerated development. The UK relies more on wind for its renewable targets, but will see a mild resurgence thanks to policy changes.