Continuing the PSU push into solar, SJVN Limited has entered into a MoU (Memorandum of Understanding) with Damodar Valley Corporation (DVC) for harnessing potential Solar Energy of about 2000 MW available under the DVC Command Area. SJVN and DVC will jointly identify suitable water-bodies and available land under the SJVN and DVC command area for setting up Renewable Power Projects. 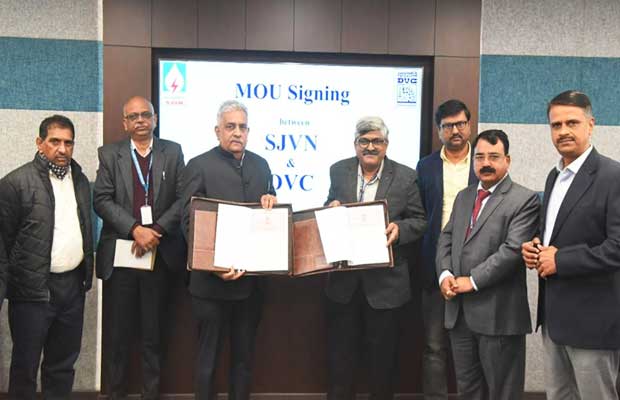 The MoU was signed by Akhileshwar Singh, Director (Finance), SJVN and M. Raghuram, Member (Technical) Damodar Valley Corporation in the presence of senior officials of SJVN & DVC. The tole of energy PSU’s has been considered a key plank of India’s ambition to reach 500 GW of renewable energy capacity by 2030, aid down by Prime Minister Modi at the COP 26 conference too.

Nand Lal Sharma, Chairman & Managing Director, SJVN informed that besides being in line with the target set by the Government of India it would enable SJVN in expanding its footprint Pan India, as well as, achieving its Shared Vision of capacity addition of 5000 MW by 2023, 12000 MW by 2030 & 25000 MW by 2040.

Sharma also stated that under the MoU signed today, SJVN and DVC will explore the formation of a Joint Venture Company for development of Renewable Energy Project at different location within the command areas of SJVN and DVC. DVC has large waterbodies under its management, which can be harnessed for Solar Power by setting up floating Solar Energy Farms.

Similar MOU’s and plans for JV’s have also been announced between NTPC and Indian Oil, Coal India and Neyveli Lignite Corporation, SJVN and GAIL too, among others. While most mark a statement of intent, it remains to be seen how many of these MOU’s lead to actual projects being executed on the ground. Even SECI has not held back, signing an MOU with oil major ONGC for renewable energy projects.