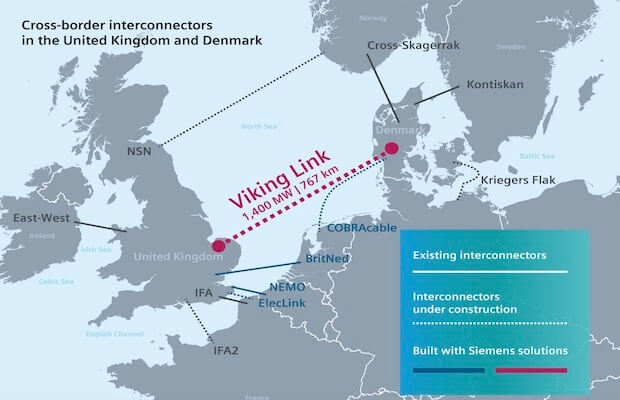 Siemens has been awarded a contract to deliver two converter stations for the first high-voltage direct-current (HVDC) transmission link between Great Britain and Denmark. Named ‘Viking Link’, the project will enable the exchange of electricity up to 1,400 megawatts (MW) to provide increased power-supply reliability and security to consumers in both countries.

By allowing the transmission to flow in both directions, it will support the integration of renewable energy sources into the power grid. The interconnector is being jointly developed by National Grid Ventures (Great Britain) and Energinet (Denmark) via National Grid Viking Link Ltd. and Energinet Eltransmission A/S. Siemens will be responsible for the overall system design, supply, installation, and commissioning of the converter stations.

The order comprises a 1,400-MW converter system for DC voltage of ± 525 kilovolts (kV) using HVDC Plus technology. The two converter stations – one in Bicker Fen in Lincolnshire (Great Britain), the other in Revising in southern Jutland (Denmark) – will be linked by a 767-kilometer-long DC power cable passing through the North Sea. Viking Link will be one of the world’s longest DC electricity interconnectors. The transmission project is scheduled to begin commercial operation at the end of 2023.

“We’re extremely pleased that, with every new interconnection, Siemens is advancing the development of an integrated European energy market. With Viking Link, we’ll be working on another landmark HVDC project that is paving the way to a secure, affordable, and sustainable energy supply,” said Tim Dawidowsky, CEO EPC Projects at Siemens Gas and Power.

The project will transmit surplus energy to wherever the level of demand is higher. Because periods of high wind energy production and high demand are unlikely to occur simultaneously in both Great Britain and Denmark, the interconnector will result in lower prices in peak consumption periods and enables more effective use of renewable energy, giving consumers in both countries access to a broader energy mix.

A key infrastructure project that will help create an integrated European Union energy market, Viking Link has been designated as one of the European Commission’s Projects of Common Interest. These projects are intended to help the EU achieve its energy policy and climate objectives, such as the long-term decarbonisation of the economy in accordance with the Paris Agreement.