At a special virtual event, Sembcorp Energy India Limited with its key management personnel, as well as the Union Minister for Power and  MNRE, R.K. Singh present, dedicated 800MW of Wind Energy projects from SECI’s tranche 1 to 3 to the nation. with this, Sembcorp became the first independent power producer to complete its projects under the SECI wind energy auctions 1 to 3.

These projects were the earliest wind projects won through open auctions and reverse bidding, starting back in 2017, and their completion on time marks a major milestone for India’s  wind energy journey. All the capacity has been hosted by Tamil Nadu and Gujarat, with the projects spread over an area of almost 2600 sq km. Over 91 villages got infrastructure in the form of better roads, during the build phase of the projects.

For Singapore headquartered Sembcorp, which has an installed base of 4.37 GW in India (with 1730 MW of renewable energy capacity) , this consolidates its position in the top tier of Indian renewable energy developers with this commissioning.

Speaking at the occasion, its India managing director Vipul Tuli said that  these projects demonstrated that the SECI managed approach to wind power projects, using open bidding and reverse bidding, could deliver and has worked. “The scale and tariffs of these 800 MW projects, from Rs 2.44 to Rs 2.56, with turbines 500 feet high and 1 MW in capacity, have been made possible by innovations across the ecosystem, by all partners involved” he added. The third 300 MW project that was commissioned today is the first in India to use 2.1 MW G122-127m wind turbines, designed to work efficiently even at low wind speeds.

Bhanu Pratap Yadav, Joint Secretary at the MNRE, added his own bit to remind people that initially, there was a lot of skepticism about the viability , and the   probability of these projects seeing the light of day. The successful completion is a proud achievement for every stakeholder, accordingly.

Sembcorp Industries’s global CEO, Wong Kim Yin was also present , and added the firm’s delight, and gratefulness to all its suppliers, and the agencies involved, in helping make this milestone event possible. 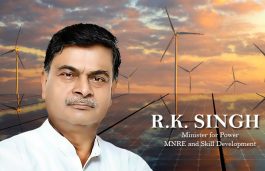 For Minister R.K Singh, the occasion was a cause for celebration at a time the industry faces so many challenges. The minister made a strong pitch for continued investment into the green energy sector, highlighting the surge in power demand that is expected as millions of households added to the grid start consuming more. Even as the country targets a doubling of per capita  power consumption in time.

He promised an environment of transparency, fairness and partnership for developers investing in the sector. Referring glowingly to Sembcorp for their professional and ethical approach, the minister called the firm one to emulate, and wished them greater success in the bids to come.

The timely completion of all three projects by Sembcorp is a creditable achievement indeed, and the firm deserves all the praise it got today for getting here. Some of the methods involved to get there were truly pushed the boundaries, like airlifting a 55 tonne Gas Insulated Switchgear to Chennai using a Russian Antonov 124 aircraft for faster commissioning.