Policymakers and regulators must build the framework required for combining rooftop solar with battery storage and electric vehicles (EVs) to meet Prime Minister Narendra Modi’s vision for a sustainable, energy-secure future, according to a new report from the Institute for Energy Economics and Financial Analysis (IEEFA).

In addition to the ambitious renewable energy target of reaching 450 gigawatts (GW) by 2030 and media reports suggesting consideration of a mid-century net-zero emissions target, Prime Minister Modi wants India to be a 100 percent EV nation by 2030.

“Policy initiatives by central and state governments are already boosting the adoption of EVs, and although slow, rooftop solar and battery uptake is increasing. What’s missing however is the opportunity to integrate distributed energy and therefore maximise the benefit of combining rooftop solar with small-scale storage, smart demand-responsive appliances and EVs,” Garg added.

The report further goes on to suggest that policymakers will need to make the technical integration of these distributed energy resources (DER) a priority.

“There are several lessons India could learn from Australia when it comes to technical integration of solar, storage and EVs,” said co-author Dr. Gabrielle Kuiper, a DER specialist and IEEFA guest contributor. “Putting in place a technical standards framework, appropriate quality controls and consumer protections for distributed energy products and installations, and appointing a respected agency to ensure compliance, will be critical in shoring up consumer and investor confidence.”

Australia is at the forefront of the distributed energy revolution with the world’s highest rooftop solar capacity per person (786 watts) and a record rate of new installations (3 gigawatts in 2020, a 39 percent increase on a year-on-year basis). Roughly one in four Australian households – about 2.7 million homes – have rooftop solar systems, and increasingly battery storage. 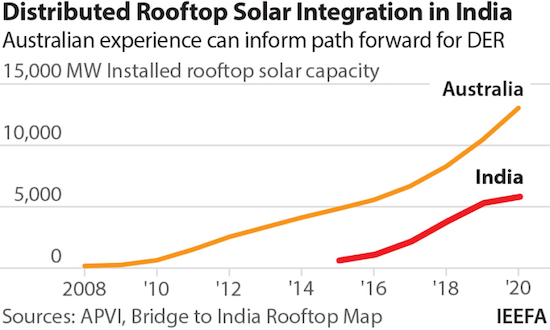 Thus, “Combining rooftop solar with storage and EVs is key,” adds Dr. Kuiper. “It is more cost-effective for private and public consumers to have distributed charging co-located with power generation and to directly charge EVs using behind-the-meter solar.”

The authors suggest that managed charging and discharging of EVs and vehicle-to-grid (V2G) technology – which enables power to be drawn from or supplied to the grid when most needed – could be a game-changer for India. An additional time-of-day price signal to incentivise supply in peak demand periods will provide much-needed flexibility in the Indian grid as the proportion of variable renewable energy grows.

Garg believes Discoms could play a greater role in facilitating a system where distributed energy resources like rooftop solar, battery storage and EVs are central, planned for and taken advantage of, driving deflation and sustainable energy for all.

However, in a system where financially strained Discoms have continued to disregard the onset of the energy transition and the benefits of renewable energy so far. Expecting abrupt changes is perhaps ‘off the list’ for the near future.

Garg added that the pace of distributed energy uptake and integration will need to accelerate for India to drive decarbonisation, improve energy self-reliance and achieve its ambitious renewable energy targets.