During the meeting, RK Singh asked Rajasthan Energy Minister, Kalla, to further improve the power sector in the state. 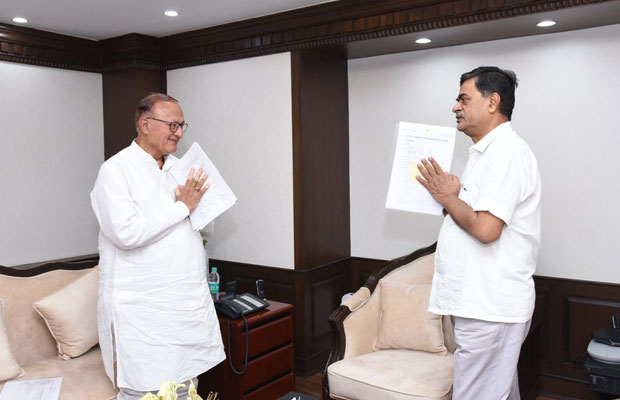 The Union Power Minister Raj Kumar Singh, in continuation of his second term in the Modi government, met with the Energy Minister of Rajasthan, BD Kalla, in New Delhi and assured him of all possible support from his side for the development of power and renewable energy sector in the state.

As per the Power Ministry, both the leaders held discussions on various aspects of the power sector in Rajasthan.

During the meeting, RK Singh asked Rajasthan Energy Minister, Kalla, to further improve the power sector in the state.

Besides, Singh also reviewed the progress of work sanctioned under ‘Deen Dayal Upadhyaya Gram Jyoti Yojana’ (DDUGJY) and asked the State Government to expedite the work, an official statement said.

Recently in another significant development, the Minister has approved the proposal to set up a three-member Dispute Resolution Committee (DRC) to consider the unforeseen disputes between solar/wind power developers and SECI/NTPC, beyond contractual agreement.

On setting up of DRC, Singh said the move will give further fillip to the smooth implementation of solar/wind energy projects in India.

He further added that, it fulfils a long pending demand of the industry to resolve expeditiously, unforeseen disputes that may arise beyond the scope of Contractual Agreements.

For quite some time, the solar and wind industry has been demanding from MNRE to set up a Dispute Resolution Mechanism to resolve expeditiously, unforeseen disputes that may arise beyond the scope of Contractual Agreements between solar power developers/wind power developers and SECI/ NTPC.

As per the Ministry of New and Renewable Energy (MNRE), the mechanism of Dispute Resolution Committee (DRC) will be applicable for all solar/ wind Schemes/ Programmes/ Projects being implemented through/ by SECI/ NTPC.