The researchers, Yunpei Zhu, Yi Cui, and Husam N. Alshareef from ACS’ Nano Letters, decided to make a battery in which a zinc-rich cathode is a sole source for zinc plating onto a copper current collector, for energy storage systems.

While conventional lithium-ion batteries work efficiently enough but, the problem with those is the limited amount of lithium and the safety issue during the usage owing to Lithium’s volatility. To tackle these issues, the researchers tried developing a prototype of an anode-free, zinc-based battery .

In fact, these aqueous zinc-based batteries have been examined for grid-scale energy storage because of their safety and high energy density, earlier. Additionally, the materials used to make them are more easily available, especially zinc. 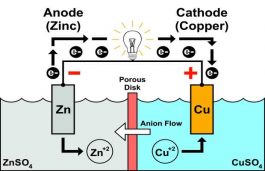 However, the rechargeable zinc batteries developed so far have required thick zinc metal anodes that contain a large excess of zinc that increases cost. Although, the anodes are prone to form dendrites (the crystalline projections of zinc metal that deposit on the anode during charging), which can short-circuit the battery. So the researchers adopted a manganese dioxide cathode that they pre-intercalated with zinc ions, an aqueous zinc tri-fluoromethane-sulfonate electrolyte solution, and a copper foil current collector.

While charging, zinc metal gets plated onto the copper foil, and during discharging the metal is peeled off, releasing electrons that power the battery. To stop dendrites formation, the researchers coated the copper current collector with a layer of carbon nanodiscs, that increases the uniform zinc plating, and the efficiency of zinc plating and stripping.

Interestingly with 62.8% of its storage capacity after 80 charging and discharging cycles, the battery presented promising efficiency, energy density, and stability. According to the researchers, the anode-free battery design brings new ways to use aqueous zinc-based batteries in energy storage systems.

The world is trying hard to become emissions-free and in that race, new technologies are being explored every day. To integrate renewable energies better, power companies need to find safer and low-cost approaches for energy storage systems. Conventional lithium-ion batteries  dominate among options available currently, but new options from flow batteries to air compressor storage that we covered today, are all vying to make a mark too.