A report has found the Adani Group to be the largest solar power generation asset owner in the world in terms of operating, under construction & awarded projects. 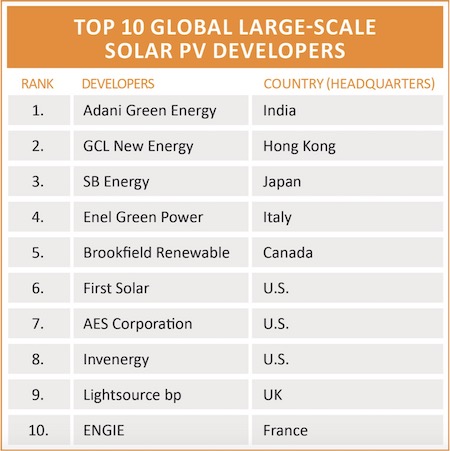 A new report by Mercom Capital has ranked the top 10 global large-scale solar PV developers. And at the very top of those rankings is the Adani Group at #1 position. Confirming it to be the largest solar power generation asset owner in the world in terms of operating, under construction and awarded solar projects.

[An underlying condition of the rankings was that to qualify for this ranking, developers must have projects in at least two countries.]

The Indian conglomerate has a renewable energy portfolio that exceeds the total capacity installed by the entire United States solar industry in 2019, and will displace over 1.4 billion tons of carbon dioxide over the life of its assets. The group is one of the most fully integrated solar players in the world, manufacturing solar cells and modules, undertaking project development, construction, financial structuring and owning and operating its assets through its robust internal asset management platform.

The firm stated that the growth story of Adani Green Energy (AGEL), its renewable focusses business, mirrors the global growth story of renewable energy following the audacious promise made by PM Narendra Modi at the International Solar Alliance (ISA) meeting held in Paris on the sidelines of COP21 in December 2015.

AGEL established its first solar project in 2015 and even as recently as 2017 the company had completed just two solar projects. The firm went public in 2018 and has since accelerated its presence to reach the current milestone of being the largest solar player in the world in a period of 5 years, with a further target to achieve an installed generation capacity of 25 GW ac of renewable power by 2025.

In response to this ranking, Gautam Adani, Chairman of the Adani Group said that “achieving this ranking is a direct result of our commitment to creating the infrastructure needed for a clean-powered future. While we are pleased to be ranked the largest solar player in the world, we recognise that there is a lot more that remains for us to do as the world transitions into an increasingly decarbonised energy landscape. We anticipate that over the next decade several existing business models will be impacted as a result of the disruption caused by the intersection of the plummeting cost of renewable energy and the ability of technology to rescale industries.

We expect our renewable energy platform will create new possibilities for our core business and we will be able to address some of the most intractable problems that humankind has faced, including affordable decentralized energy, availability of distributed clean water, green hydrogen as an alternate fuel, and micro agriculture, among others. Building partnerships with major industrials, data center providers, and global integrated energy players that seek to reduce their carbon footprints will also continue to further accelerate our growth. AGEL was launched just five years ago, our story is only beginning.”

AGEL also achieved a top spot in the global ranking in terms of under construction and awarded capacity with 10.1 GW of projects, making it the definitive leader in mega-scale renewable energy project deployment