Renewables Account for Almost Three Quarters of New Capacity in 2019

The renewable energy sector added 176 GW of generating capacity globally in 2019, which is marginally lower than 179 GW added in the previous year. 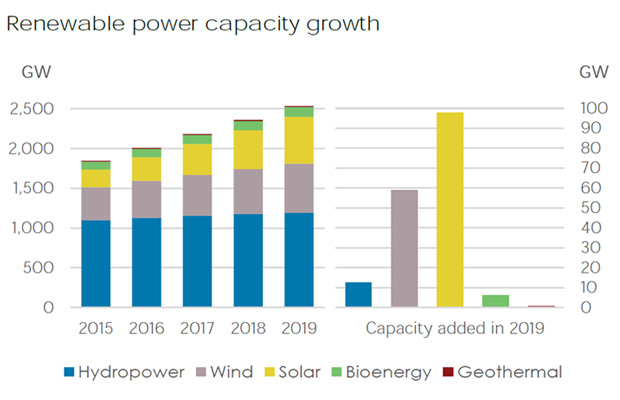 According to data released by the International Renewable Energy Agency (IRENA), new renewable power accounted for 72 per cent of all power expansion last year.

However, renewables accounted for at least 70 percent of the total capacity expansion in almost all regions in 2019, other than in Africa and the Middle East, where they represented 52 percent and 26 percent of net additions, respectively, the report added.

Thus, the additions took the renewable share of all global power capacity to 34.7 percent, up from 33.3 percent at the end of 2018.

At the end of 2019, global renewable generation capacity amounted to 2 537 GW. Out of which, wind and solar energy accounted for 623 GW and 586 GW of capacity respectively, as per the report.

In 2019, solar and wind energy continued to dominate renewable capacity expansion, jointly accounting for 90 percent of all net renewable additions, said IRENA. However, this unusually high share may reflect the very low expansion of hydropower last year, it added.

Meanwhile, Asia continued to dominate global solar capacity expansion with a 56 GW increase (about 60 percent of the total in 2019), but this was lower than in 2018.

The report stated further that China, India, Japan, Republic of Korea and Viet Nam were the countries with the most new capacity in 2019. Other major increases were in the United States, Australia, Spain, Ukraine and Germany.