Based on the production figures, solar energy showed the largest growth at 16 percent, ahead of wind energy with 5.4 percent growth.

Researchers at the Fraunhofer Institute for Solar Energy Systems ISE have just released their annual assessment on the net electricity generation for Germany’s public power supply in 2018.

Based on the production figures, solar energy showed the largest growth at 16 percent, ahead of wind energy with 5.4 percent growth. 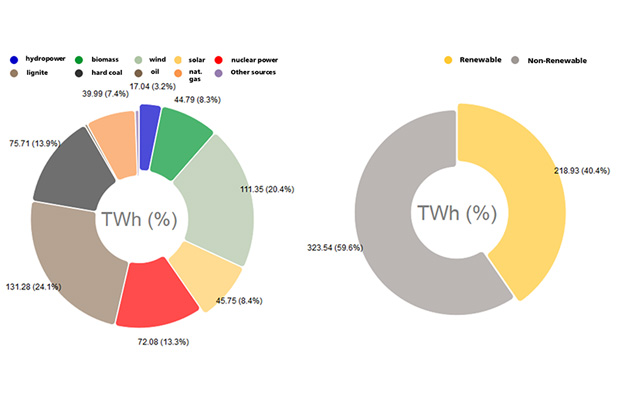 As per the report, in 2018, German photovoltaic plants fed about 45.7 TWh into the public electricity grid, 16 percent more than in 2017. New photovoltaic installations of 3.2 GW increased the installed capacity to 45.5 GW (as of the end of November). On July 2, 2018 at 13:15, solar power production peaked at ca. 32 GW, corresponding to 39 percent of the total power production at this point in time. From April through August 2018, German photovoltaic plants generated more electricity per month than hard coal power plants.

Due to the extremely dry summer, hydro power contributed only 17 TWh to the electricity mix, the second lowest amount in 30 years. From May to December, the monthly electricity generation from hydropower was less than the previous year. At ca. 44.8 TWh, electricity from biomass was equivalent to the production in 2017.

In 2018, the total electricity production from all renewable sources was about 219 TWh, an increase of 4.3 percent compared to 2017. With this, renewables contributed over 40 percent to the public net electricity generation in Germany.

The electricity generated by nuclear plants was 72.1 TWh in 2018, approximately equivalent to 2017.

Gas plants demonstrated the greatest decrease in production, contributing 40 TWh net electricity to the public power supply. This amount was less than the 2017 level by 9.1 TWh, or 18.5 percent. Gas plants for the manufacturing and mining industries additionally produced ca. 20 to 25 TWh for self-consumption in the industry.

In 2018, Germany’s export surplus (physical flows) was ca. 45.6 TWh, slightly lower than 2017 (52.5 TWh). The majority of the electricity was exported to Holland (19.2 TWh), who then transmitted it further to Belgium and Great Britain. Austria followed in second place (11.6 TWh), ahead of Switzerland (11.5 TWh) who principally acted as a transit country for Italy.

Germany imported 8.3 TWh of electricity from France, mainly transmitting it to neighboring countries. The average amount of exported power was c. 5.2 GW, the equivalent of four nuclear power plants. During 7730 hours (88 percent) of the year, electricity was exported by Germany, while during 1030 hours (12 percent) it was imported. In Germany’s electricity foreign trade balance from January to October, Germany had an export surplus of 52.8 TWh and revenues valuing 1.81 billion euros. On average, imported electricity cost 42.39 euros/MWh and exported electricity 38.60 euros/MWh respectively. The average volume-weighted day-ahead spot price of 43.26 euros/MWh was 30% above the 2017 value (32.89 euros/MWh).