Investments in renewable energy capacity worldwide was USD 282.2 billion last year, up 1% from 2018, India saw an investment of USD 9.3 billion, down 14%

Investments in renewable energy capacity worldwide was USD 282.2 billion last year, up 1 percent from 2018’s USD 280.2 billion, with the world’s biggest market (China) slipping back, but it’s second-largest (the US) hitting a new record. India, on the other hand, saw an investment of only USD 9.3 billion, into green energy, 14 percent less than in 2018.

The latest data from research company BloombergNEF (BNEF), shows how what had been a subdued first few months of 2019 gave way to a busier second half, with the highlights including US onshore wind and, in particular, offshore wind in China and Europe.

Tom Harries, head of wind research at BNEF, said, “offshore wind developers in China brought forward 15 projects to beat a scheduled expiry of that country’s feed-in tariff. We expect the sector’s global momentum to continue in 2020, with the focus on gigawatt-scale projects in the British North Sea and the first commercial arrays off the U.S. East Coast.”

The late surge in offshore wind financings took a capacity investment in that sector to USD 29.9 billion, up 19 percent on 2018 and USD 2 billion more than in the previous record year of 2016. Among the offshore projects reaching financial close in the fourth quarter was the 432 MW Neart na Gaoithe array off the Scottish coast at USD 3.4 billion, the 376 MW Formosa II Miaoli project off Taiwan at USD 2 billion and the 500 MW Fuzhou Changle C installation in the East China Sea, at USD 1.5 billion. The first of France’s offshore wind projects to be financed, the 480 MW, USD 2.5 billion Saint Nazaire, got its go-ahead in the third quarter. 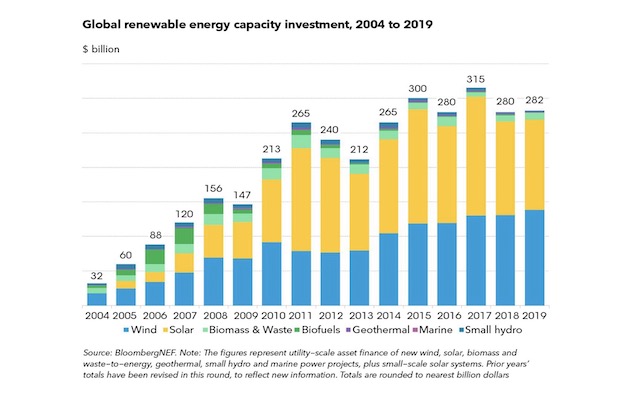 Looking at the overall renewable energy capacity investment figures for 2019, wind (onshore and offshore) led the way with USD 138.2 billion globally, up 6 percent. Solar was close behind, at USD 131.1 billion, down 3 percent. Falling capital costs in wind and solar meant that the two combined are likely to have seen around 180 gigawatts added last year, up some 20 GW on 2018.

China was yet again the biggest investor in renewables, at USD 83.4 billion in 2019, but this was 8 percent down on 2018 and the lowest since 2013. It saw a 10 percent rise in wind investment to USD 55 billion, but solar fell 33 percent to USD 25.7 billion, less than a third of the boom figure reached in 2017. The US was the second-largest investing country in renewable energy capacity, at USD 55.5 billion, up 28 percent on 2018. Instrumental in this was a rush by wind and solar developers to qualify for federal tax credits that were due for scale-back in 2020.

BNEF’s wider-definition of total clean energy investment, which includes money going into research and development, and into specialist companies via public market share issues and venture capital and private equity deals, was USD 363.3 billion in 2019, fractionally up on the previous year’s revised USD 362.5 billion