Home » News » Renewable Energy Certificates. Trading Resumes, But Much Needs To Be Done

Renewable Energy Certificates. Trading Resumes, But Much Needs To Be Done

The Appellate Tribunal for Electricity (APTEL), in an order issued earlier this month had started the process for resumption of trading of Renewable Energy Certificates (REC)’s on the Indian Energy Exchange as well as Power Exchange of India Ltd (PXIL) after a long halt. The pause, which lasted for 16 months has not only led to an overall slowdown in distribution of RECs but had also presumably ‘impacted’ distribution companies in meeting their Renewable Purchase Obligations (RPOs).

In order to spur growth in the renewable energy space, the State Electricity Regulatory Commissions (SERCs) are obligated to purchase energy from renewable sources. This of course varies based on every state’s renewable potential. Such obligations known as the RPOs are usually applicable to purchases from power distribution companies, captive power plants and other large electricity consumer, binding them to buy a certain percentage through renewables.

As per the applicable regulations, purchase of RECs in lieu of purchasing renewable power is the necessary binding under the RPOs. One REC is created when one megawatt hour of electricity is generated from an eligible renewable energy source.

The trading of the RECs was put on hold in July 2020, after an order from APTEL which directed postponement of the trading session that was scheduled to be held on July 29, 2020. Following the recent order, both the exchanges resumed trading of RECs with effect from November 24, 2021.

Many experts from the industry argue that RECs have played an important role in encouraging growth of renewable energy and in helping the country meet its national renewable energy goals. REC is a legally empowering instrument which generally mentions important details such as – the type of renewable resource, location of the resource, date of stamp or generation details, emissions profile of the generating resource and apart from unique identification number. In short, RECs make the electricity use ‘renewable’.

REC trading done at two power exchanges – India Energy Exchange (IEX) and Power Exchange of India Ltd (PXIL) – was conducted once every month prior to the pause imposed last year. An IEX statement said that the last REC trade session had taken place in June 2020. It further said that they have resumed in line with APTEL’s recent order dated 09.11.2021 and Central Electricity Regulatory Commission (CERC) order dated 18.11.2021.

PXIL too, in a statement clarified that the REC mechanism is a market-based instrument to promote renewable energy and facilitate compliance of RPO target for the year.

As per industry data, of about 1,381 billion units (BU) of electricity consumed in India, about 7% is traded on power exchanges. The commodity exchanges have been a platform for buyers and sellers of electricity to enter spot contracts with distribution companies. Hence, both powerhouses of renewable market exchange have welcomed the move of allowing issuance of RECs.

The IEX alone, which has pioneered trading REC market, has cumulatively traded 390 lacs renewable energy certificates since commencement of the market in the year 2010. And has been playing a significant role in supporting the transition to a sustainable energy economy.

Now, as the market has opened up, it needs to be watched out for. There are still bottlenecks like enforcing compliance of RPO targets by States. Unfortunately, with most states, slackness in terms of enforcing of RPO targets has been a norm. Strict compliance to RPO targets depends on many factors, among which lack of uniformity in the enforcement of RPOs is most significant. Trading restrictions of REC had added to the woes. 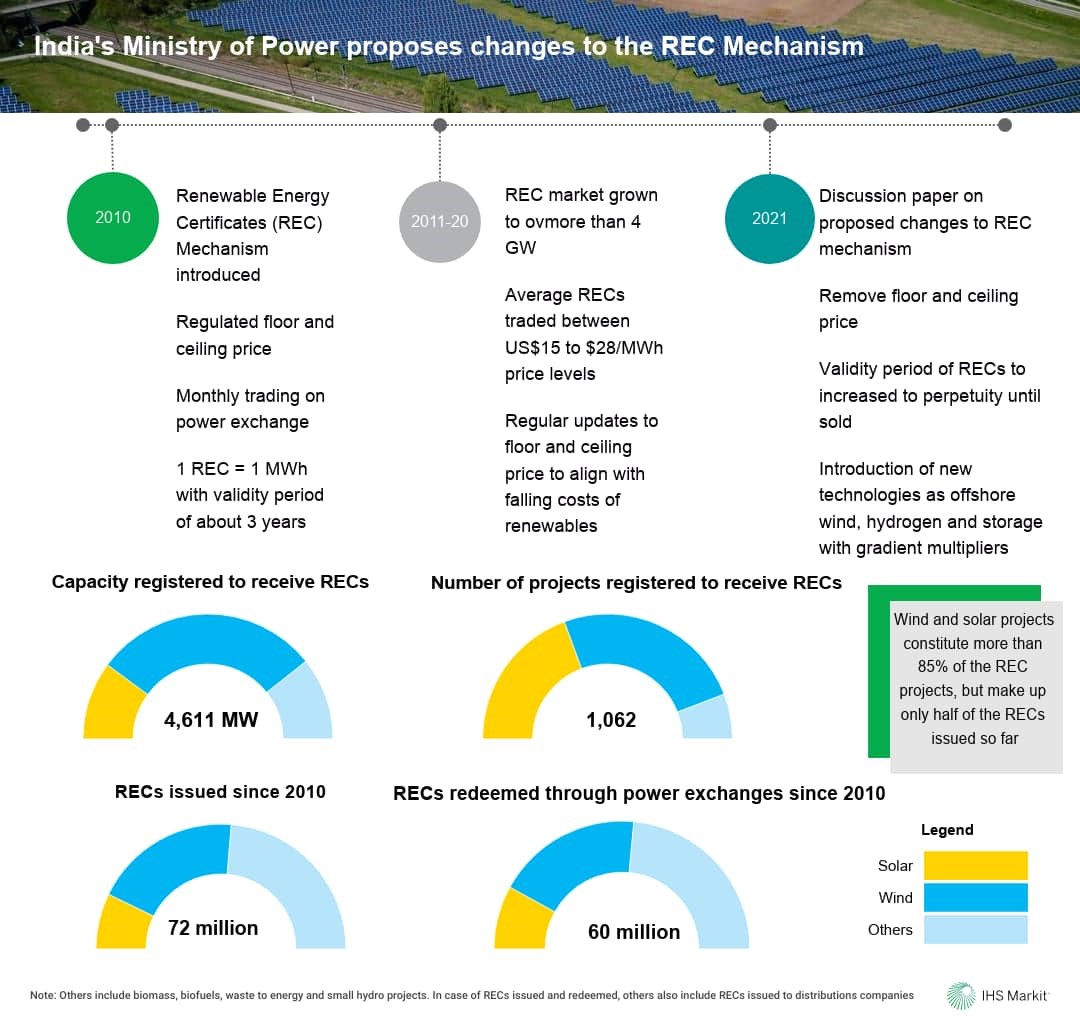 An IHS Market report claims that while wind and solar projects constitute more than 85% of the REC projects, they make up only half of the RECs issued so far. Concerns about the validity of the REC have also been raised.

Globally, RECs are valid for one to two years. While Australia mandates the validity up to one year, UK puts a cap of two years. For India too, market studies recommend not increasing the validity and limiting it to three years. The IHS study insists on putting the emphasis on ensuring demand in the market.

Increasing validity of the RECs to perpetuity results in tightening of supply of RECs in market, which may result in price distortion instances, states IHS. It is argued by market experts that while CERC is expected to monitor the hoarding of RECs, but no clear structure is provided on penalties or processes to check hoarding. Also, it is argued that the trading frequency for RECs could be increased from the current once in a month to bi-monthly or weekly to ensure more activity.

A decade after the beginning of REC trading, as many as 59.5 million RECs have been sold on both exchanges at a net value of INR 9,266 crore (USD 1.24 billion). The current utilization of the REC restricts it to being a single-use instrument. Over 99 % of the certificates traded have found their end use to meet only the RPO targets of the obligated entities. While the trade volume has been significant, the aim to only meet RPOs substantially underscores the market’s potential to play a key balancing role in India’s renewables market, especially given the uneven distribution of RE resources.

Recognizing the need for a change in mechanism, in September end of 2021, Union Minister of Power and New & Renewable Energy, Shri RK Singh gave his consent to amendments in the existing REC mechanism. The intent behind this decision was to align the ‘mechanism’ with the emerging changes in the power scenario and to promote new renewable technologies.

The proposed changes are expected to provide some flexibility to the players, additional avenues, rationalization and addressing the RECs validity period and other issues. Extensive stakeholder consultations had been held towards drawing up these changes, after the MoP had circulated a discussion paper on redesigning the REC Mechanism for comments of stakeholders in power sector on 4th June 2021.

The whole debate around RECs gains significance especially because it comes close on heels of the Glasgow Summit and subsequent expected action items that come under enablers of positive environment for growth of solar industry.

Significantly, the Ministry had removed the floor and forbearance price limits, and also said that REC prices will be determined by market conditions. 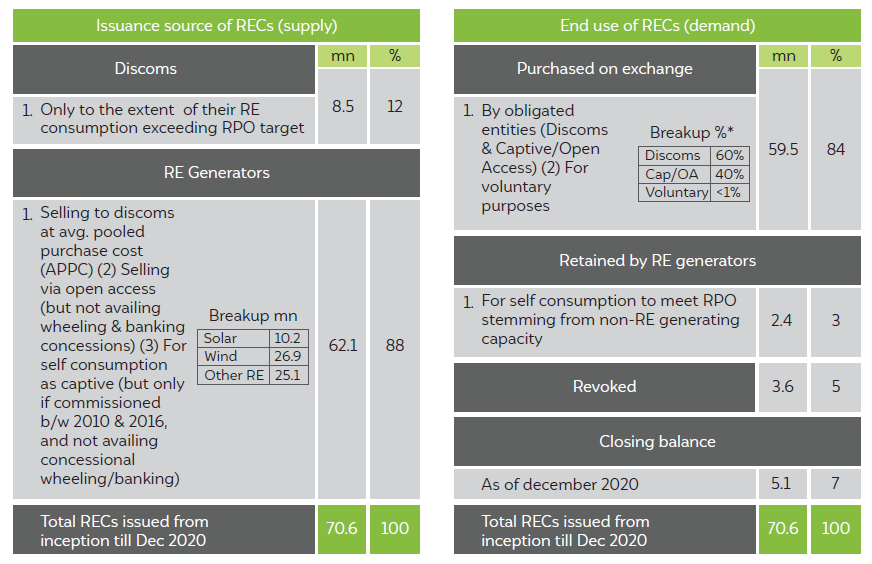 As per CEEW-CEF analysis, as many as 5.1 million RECs have remained unsold due to poor RPO compliance across India, a demand shortfall of 7%. The analysis of CEEW-CEF also shows that India’s 27 RPO under-compliant states would have needed to buy an additional 67.2 million certificates in 2020 if they had chosen only to use RECs to meet their targets. Total REC issuances between 2011 and 2020 amounted to just 70.6 million.

Experts feel that the reboot which has been initiated by the Ministry should not only focus on boosting demand but also prepare for potential supply crunches. These could occur if policymakers tighten lax regulations that currently allow defaulters to carry forward RPOs instead of meeting their targets using RECs.

The vast under-representation of solar power in the REC market is another area of concern analysts raise. Solar projects account for only 16% of all RECs issued to power generators. Discoms, the largest consumers of solar power in India, account for only 12 per cent of REC issuances. This data is in sharp contrast to the significant role that solar is expected to play in expanding India’s RE capacity.

Market experts like CEEW-CEF recommend incentivizing RPO compliance and REC purchases to boost the demand, and to also look beyond RPOs to expand the end user base for REC network, and to improve flexibility to allow the participation of low-capacity projects.

It is clear that enforcement of RPO targets, despite availability of RECs has been poor. So, it will be interesting to see how this market shapes especially given India’s RE commitments on the global platforms.